The viral fake message lists 14 Chinese-original apps to be restricted by Google Play and App Store in India. 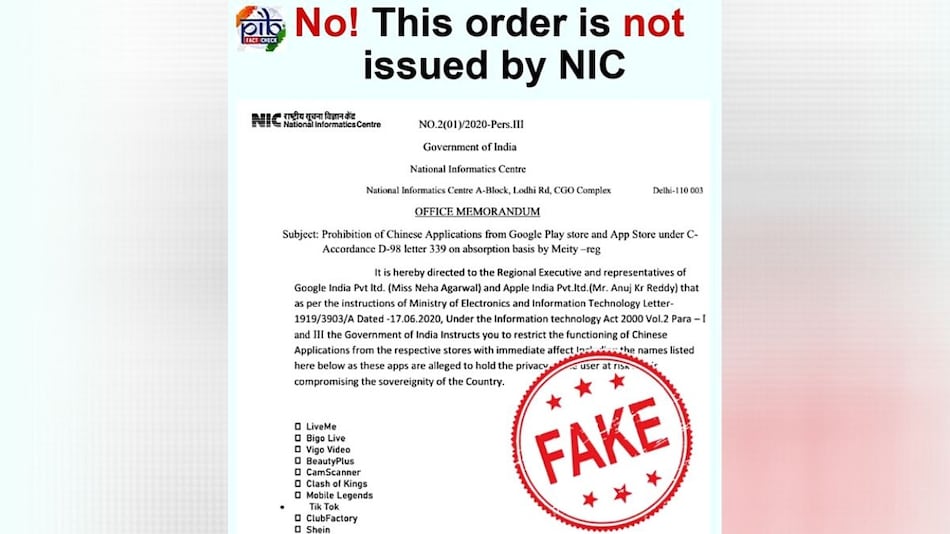 The viral message includes popular apps such as TikTok

The government on Friday refuted a viral message claiming that the Ministry of Electronics & IT (Meity) had put restrictions on several "Chinese applications" in India. The message has been doing rounds of the Internet, claiming that the National Informatics Centre (NIC) that comes under the Meity, has asked Apple and Google to restrict Chinese-origin apps on Google Play and App Store with "immediate effect." The alleged list of Chinese-origin apps in the viral fake message included TikTok, Clash of Kings, Game of Sultans, Vigo Video, and more.

In a tweet, the government's Press Information Bureau (PIB) fact-checked the viral message and dubbed it fake, saying that the message was not issued by NIC.

Claim: A viral message of an order allegedly from NIC claims that @GoI_Meity has prohibited some apps from being made available on App Stores. #PIBFactCheck: The Order is #Fake. No such instruction has been given by @GoI_MeitY or NIC. pic.twitter.com/Dt7rMR7nIz

What does the viral message say?

The viral message shared by PIB Fact Check highlights that the NIC has issued an order, instructing the restriction of 14 apps provided by Chinese companies, on Google Play store and Apple's App Store. The message claims that the government has directed the regional executives of Google and Apple to restrict the apps as they put users' privacy at risk and compromise the "sovereignty of the country."

The list includes apps such as LiveMe, Bigo Live, Vigo Video, Beauty Plus, CamScanner, Clash of Kings, Mobile Legends, Club Factory, Shein, Romwe, AppLock, Vmate, and Game of Sultan. It also claimed that the government has asked Apple and Google to restrict TikTok from their respective app stores.

The timing of the fake message isn't surprising as it comes amid rising anti-China sentiments in the country. Earlier the month, Google had removed the Remove China Apps application from Google Play for violating deceptive behaviour policy. The Remove China Apps in a short period had crossed over 50 lakh downloads.

Similarly, the rise of the anti-China sentiment helped TikTok alternative Mitron to gain massive popularity in India in the last one month. The TikTok clone app currently has over 50 lakh downloads on Google Play.