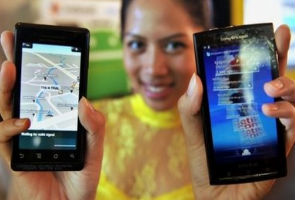 Highlights
Startup Scoopler was inviting owners of Android-powered smartphones to install an application that promises to alert them every time a celebrity is sighted nearby.

The free JustSpotted software was available online at the Android Market.

"There is no other application that gives you real-time alerts like this with thousands of spottings on our website every day," Scoopler co-founder AJ Asver told AFP in an email.

"If you are in a metropolitan area, you are going to be pleasantly surprised by how close you are to the celebrity world."

JustSpotted.com launched in October with an online map that pinpoints celebrity whereabouts in real time based on public updates from social networking star Facebook and microblogging service Twitter.

While branded by some as a potential resource for stalkers, JustSpotted billed itself as "celebrity friendly" and said stars can make deals to use the service to promote their images or messages.

"We have not had any complaints from celebrities," Asver told AFP. "We've actually been approached by people about promoting upcoming films."

He said that a version of JustSpotted tailored for iPhones was undergoing an Apple approval process and was expected to be available in the App Store by the end of the month.