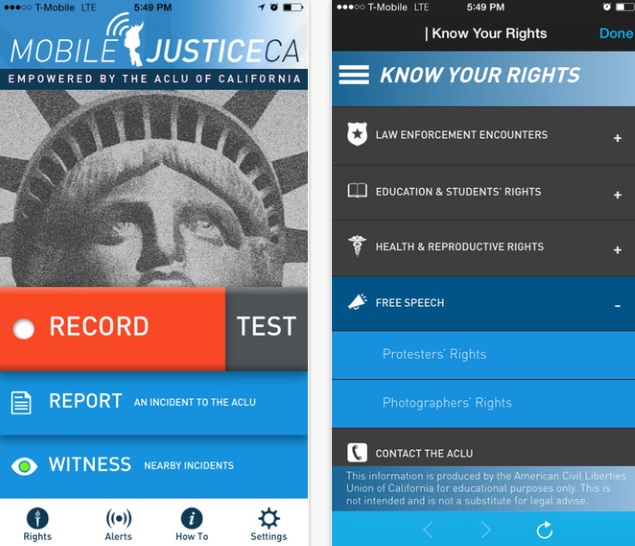 A California civil liberties group launched a mobile application on Thursday that will let bystanders record cell phone videos of possible cases of police misconduct and then quickly save the footage to the organisation's computer servers.

The California chapter of the American Civil Liberties Union said the app will send the video to the organisation and preserve it even if a phone is seized by police or destroyed.

The launch of the ACLU's "Mobile Justice CA" app comes as law enforcement agencies face scrutiny over the use of lethal force, especially against African-Americans, following several high-profile deaths of unarmed black men in encounters with police over the last year in the United States.

The app is targeted at residents of the most populous U.S. state, but ACLU chapters have launched similar mobile apps in at least five other states, including New York, Missouri and Mississippi over the last three years.

It also sends an alert to anyone with the app who might be in the area, giving them an opportunity to go to the location and observe, the ACLU said.

Villagra said the ACLU, in looking at which cases to delve into more deeply, will prioritise those that come with a written report, which is another element users can submit through the app. Records of incidents from users living in other states will be sent to ACLU officials there, he said.

ACLU officials advised anyone interacting directly with officers who wants to use the app to announce they are reaching for a phone, because officers might mistake the device for a weapon.

A representative from the California Peace Officers Association declined to comment immediately on the app.

In the past, advocates for police have expressed concern that people videotaping officers might interfere with their duties in an already tense situation.

This week in Los Angeles, the city's Police Commission approved rules governing the use of body cameras as its police department moves towards becoming the largest in the nation to put the devices into widespread use.

Xiaomi Mi 4i Review: Back to the Winning Formula
HTC One M9 Receives Raw Photo Support With Camera App Update