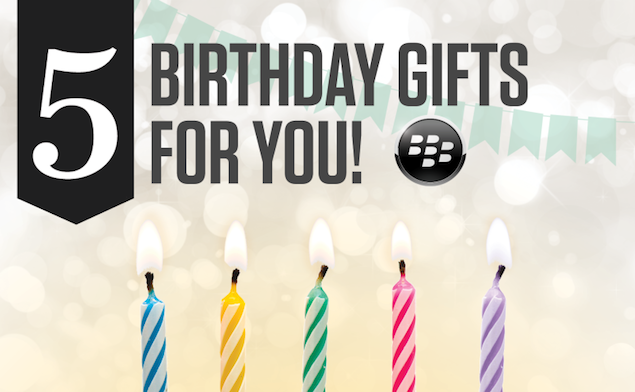 The free apps became available to users from Monday (31 March) and the '5 Birthday gifts for you!' promotion will go on till Friday (4 April). The selection includes any five apps chosen from a list of premium apps and game downloads. There is a complete list of terms and conditions about the devices supported under the celebrations.

The apps can be downloaded on BlackBerry World. With the '5 Birthday gifts for you!' promotion, BlackBerry 10 device users can choose apps from Tilt, Scan to Text, InstaVenue, Uno, Doodle Jump.

On the other hand users of the BlackBerry 7 devices can choose from Iron Man 3, Uno & Friends, ColorID, Photo Studio Pro and Keep Calm-o-matic Theme. All the same apps are available for free on the BlackBerry World India site.

Considering that some of the apps mentioned can cost anywhere between Rs. 50 to Rs. 150, it is a good bargain for BlackBerry users to pick up at least five of them for free.

To get the free apps, Halliwell writes that a user need to access BlackBerry World from the BlackBerry 10 or BlackBerry 7 OS smartphone and tap on the Birthday Gifts banner. Once done, users can select the apps or games and tap on the free button to download them. The promotions can take up to 24 hours to reflect on the device, he writes further.

It is important to remember that recently both the Google Play store and the Amazon Appstore for Android had run similar promotional offers to celebrate their birthdays recently.
Comments