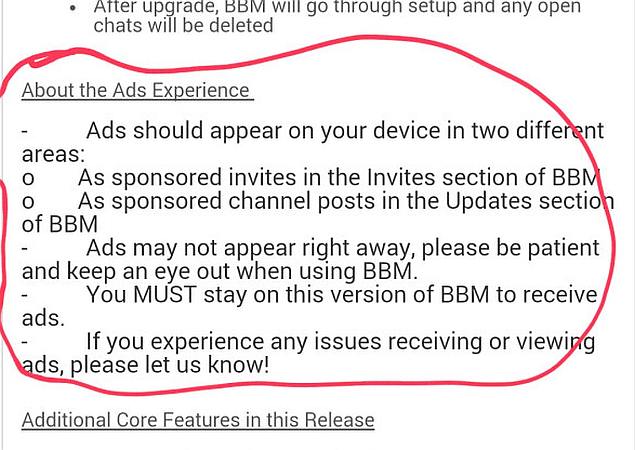 Looks like BlackBerry is planning to infuse advertisements in its popular cross-platform messaging service - BBM or BlackBerry Messenger - if reports of changes in the Beta Zone version of the app are to be believed.

The Waterloo-based smartphone maker's implementation of ads in the form of sponsored invitations are said to be seen in the BBM Invite section, and sponsored channels in the BBM Updates section. If true, there is still some time for BlackBerry to roll out these advertisements in BBM as the feature is reportedly being tested under Beta Zone builds of BBM.

The update was first spotted by @djghettoredneck, who provided an image to support the claim. Additionally, it has been noted in the image that the user "MUST stay on this version of BBM to receive ads," indicating the availability of ads for a limited number of users. However, since the firm has not mentioned anything concrete on the topic, the news can still be taken with a pinch of salt - the final implementation might be quite different.

BlackBerry has been focussing regularly on its BBM these days as we saw some updates in the past few weeks. The Canadian firm is also getting ready to introduce new features in the BBM app, with an announced update bringing the photo-sharing feature in BBM group chats, and increasing the size of the shared files from 6MB to 16MB, both for iOS and Android users. These features were supposedly also spotted in the Beta Zone build of the BBM app.

Other features reportedly spotted in the Beta Zone build of the BBM app included the ability to view images in landscape and portrait orientation, and Control Group notifications being treated as separate from other notifications. This indicates that once the announced update of the app arrives, it will bring advertisements, along with the above rumoured features of the Beta Zone.

BlackBerry is reportedly also working on possibilities of transferring money via its BBM service. The firm is also said to have tried its BBM Money Service in Indonesia, supposedly teaming up with a local bank.

During MWC 2014 in February, it was also announced that the BlackBerry Messenger service will be available for Microsoft's Windows Phone and the upcoming Nokia X platforms in the coming months.