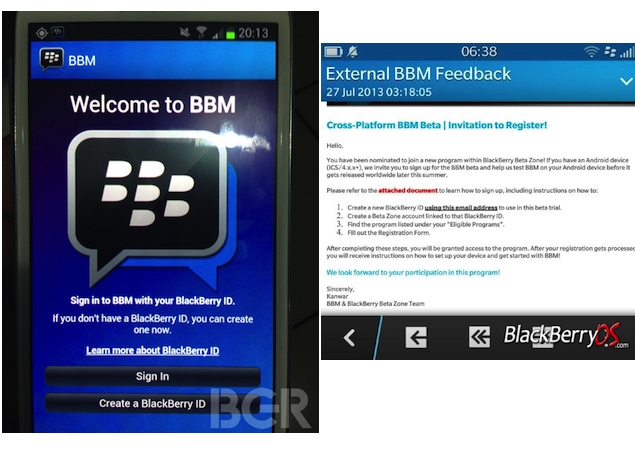 BlackBerry had earlier announced that it will extend its popular messaging service BlackBerry Messenger, lovingly abbreviated as BBM, to Android and iOS platforms by summer.

While we're not sure if many are holding their breath for the service to cross over to other mobile platforms, the first signs of its move have now surfaced online.

After a false alarm following a tweet that predicted a June 27 launch for the app, BGR has now managed to get its hands on an Android phone running the app. The site has only posted a shot of the app's splash screen, saying that going any further would reveal the identity of the source. It has mentioned that "the software 'isn't bad' and should be released in the not-too-distant future." The screen reveals that users would be able to sign-in to BlackBerry Messenger with their BlackBerry IDs.

Interestingly, BlackBerry has also invited a small set of users who're registered with BlackBerry Beta Zone to try out the Beta version of the cross-platform BBM app on their Android device before the app is released to the public. The development was reported first by BlackBerryOS.com which also published a screenshot of an email inviting a user to sign-up for the BBM Beta program. It does suggest that BBM for Android will run on devices running Android 4.0 Ice Cream Sandwich or higher versions of the OS.

BlackBerry had announced plans to extend BlackBerry Messenger (BBM) to Android and iOS in May.

BBM allows BlackBerry users to seamlessly exchange texts, audio, videos and pictures with each other. However, a number of cross-platform mobile messaging apps including WhatsApp, WeChat and Line have taken over as preferred choices since they are available on a variety of platforms.
Comments