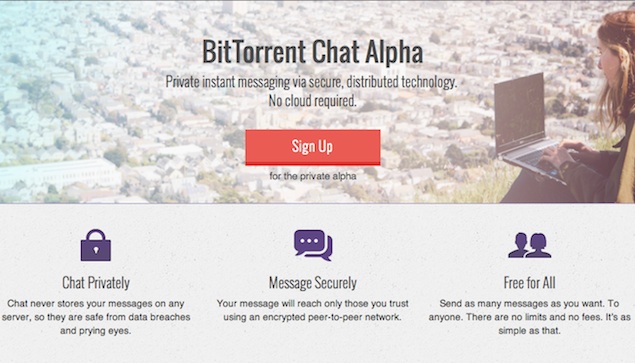 BitTorrent has announced that it's working on a new server-less chat service that would be private, secure, and free.

The organisation behind the popular file sharing service by the same name has announced BitTorrent Chat, a pre-Alpha experiment in server-less messaging and is accepting applications for testing out the service. One can apply for an invite to the private alpha version of the service at the BitTorrent Labs website.

Not many details have been made available, but BitTorrent's communications chief Christian Averill told CNET that there's no central server that stores communications, and that the service apparently works "similar to BitTorrent Sync, but adapted for real-time communications."

The report also mentions that the service requires a BitTorrent account at this point in time but is expected to work with other instant-messaging services and be interoperable with SIP standards.
It's not clear as to which desktop platforms will get the app first but mobile apps will also be offered, as per the report.

In the wake of the recent revelations about the NSA tracking interpersonal communication, people have become skeptical of online communication services. So the service might bring a sigh of relief to them as communication will not pass through an intermediary, and hence will not offer a central point that can be tracked by the authorities.

BitTorrent had previously launched Sync, an app that lets users securely sync files and folders across multiple devices. The app allows users to experience the functionality of file sync and storage services like Dropbox and Skydrive, but doesn't require them to store their files on a third-party server. It lets users access their files across multiple devices via the BitTorrent technology and there's no limit to file size, transfer or storage limits. Also, since a third-party doesn't have access to user data, and data is encrypted, there are fewer privacy and security concerns.
Comments