The BevQ app reportedly generates e-tokens that need to be shown at the liquor store to purchase alcohol. 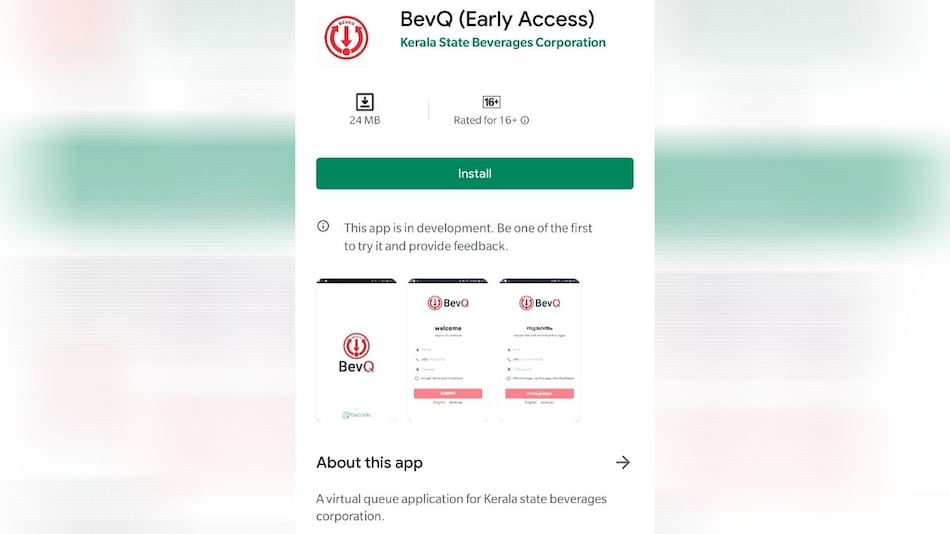 Liquor sales in Kerala will resume from May 28

BevQ, the virtual queue management app for liquor sale in Kerala has reportedly received Google's nod to go live on Play Store. The app is provided by Kerala State Beverages Corporation (BEVCO) and is developed by Kochi-based startup called Faircode Technologies Private Limited, as per reports. It is also reported that the Kerala government through the app is aiming to manage overcrowding at liquor stores amid coronavirus pandemic. The 'early access' version of the BevQ app was live today morning, however, it is not available on Google Play Store anymore.

According to a report by Manorama Online, BevQ app will essentially be used to generate e-tokens for the sale of liquor in Kerala that will resume from Thursday. Similar to the e-token system introduced by the Delhi government to manage crowding outside liquor stores amid the pandemic, the BevQ will reportedly direct the customers to the nearby outlets based on the GPS location.

It is also indicated that the app can handle over 35 lakh users/bookings simultaneously. Speaking more over the development of the BevQ app, CEO of Faircode Technologies, M.G.K. Vishnu has told The Print that the company is in the process of making the app available to download.

"Apart from the backend technical process for the seamless operation of the app, some mandatory processes like training the staff at liquor outlets to deal with potential hitches also need to be done," Vishnu told the online media outlet.

How does is BevQ work?

According to Manorama Online, customers who place their orders through the BevQ app will first receive an e-token with a QR code on their mobile phone. This token will be scanned by the liquor store licensee following which the alcohol will be handed to the customer.

"Customers can select brand at the outlet and make the payment. In the first phase, the liquor brand cannot be selected on the app," the report reads.

It is also stated that a customer can buy liquor only once in four days in the state, using the BevQ app. Users who do not have an e-token will not be able to purchase liquor. Additionally, people residing in Red zones cannot purchase liquor or book a slot using BevQ app. E-tokens can be acquired via the SMS method and more information about this expected from the state government.

When will the BevQ app be available?

It is reported that the proposal for approval to Google was submitted last week by the Indian Computer Emergency Response Team, and the BevQ app will be able to download "soon." It is unclear whether the app will reach iOS devices.

The 'early access' version of the app was reportedly live today morning, however, it has now disappeared from the Google Play store. Meanwhile, a fake BevQ app is doing the rounds of the Google Play Store and was already downloaded by over 10,000 users.

Following this development, jubilant residents of the state took to the Internet to express their happiness. Several users also started commenting on Google CEO Sundar Pichai's profile to thank him for approving BevQ app, not that Pichai is involved in the approval process.