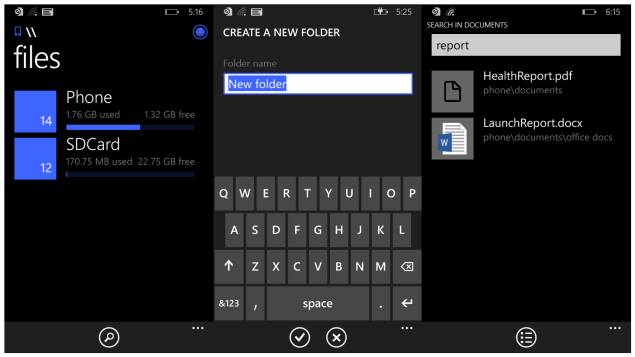 Microsoft has teased its new File Manager app for Windows Phone 8.1, and said it can be released by the end of this month.

Joe Belfiore, Microsoft's Vice President of Windows and Windows Phone user experience, confirmed the existence of File Manager app when the question was asked during a Reddit Ask Me Anything (AMA) session on Friday.

" *** YES *** We are doing a File Manager for WP8.1! I know a LOT of you are looking for this (thanks for the tweets, I've read them all). In fact, I've been running a build of it on two of my phones for the last week or so and it's getting to pretty good shape," Belfiore answered enthusiastically.

He had also shared a link that contains six screenshots of the unreleased app, and further added that Microsoft is expecting to "get it into the store HOPEFULLY by the end of May."

The teased screenshots indicate that with the File Manager app for Windows Phone 8.1, users will get the ability to navigate through the device's built-in storage as well as external. The app will also enable user create new folders, move files from one folder to another, and search ability with in folder.

Earlier Microsoft had rolled out the pilot program 'Respond to app reviews' that enables developers to respond to reviews of Windows Phone apps directly from Dev Center.