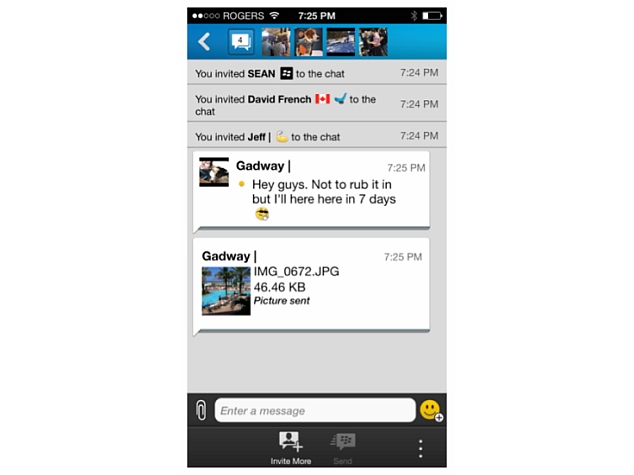 BlackBerry's evident focus on its cross-platform messaging service, BBM or BlackBerry Messenger, has resulted in yet another update for Android users and iOS. The Waterloo-based firm is getting ready to introduce the photo-sharing feature in BBM group chats, and increasing the size of the shared files from 6MB to 16MB.

Jeff Gadway, head of product and brand marketing for BBM, made the announcements in a BlackBerry blog post, "The next release of BBM will support photo sharing in multi person chats. This comes as an addition to existing sharing options that exist in multi person chats - sending voice notes, sharing your location powered by Glympse, and sending files from your Dropbox account. We also understand that customers want to be able to send larger files through BBM. While our file size limit on shared files has historically been set at 6MB, we're increasing this to 16MB in the next release of BBM."

Gadway detailed just what the increased shared file size limit would mean: "What this means is that you'll be able to send bigger pictures, larger documents and longer videos. For example, the 6MB transfer limit today allows you to send 6 seconds of 1080p HD video (recorded on a BlackBerry Z30 smartphone). With the increase to 16MB, you will be able to send 16 seconds of video using the same settings." A few other minor tweaks in the next update include larger emoticons.

For now, there is no word on when exactly the update will start rolling out. BlackBerry recently announced Windows Phones and Nokia X platforms will soon be receiving the BBM service as a free app this summer.