Share on Facebook Tweet Snapchat Share Reddit Email Comment
The much anticipated cross-platform avatar of BlackBerry Messenger or BBM is soon expected to appear on Android devices and iPhones, with the company hosting events in Malaysia and India on September 18th, where it's expected to offer more details about the service including its launch date.

In the meanwhile, it seemed as if the person behind Samsung Mobile Nigeria's official Twitter account jumped the gun and announced that BBM would debut on Friday, September 20th and confirmed that it would be exclusively available on Samsung devices for three months, in response to a user's tweet.

However, BlackBerry has denied that the service would be exclusive to Samsung customers. The company issued a statement to CrackBerry that quoted Victoria Berry, BBM Communications Director at BlackBerry as saying, "The excitement around the upcoming BBM launch on iPhone and Android devices seems to know no bounds. Although I'm a big fan of this passion, I want to clarify that no one will have an exclusive on offering BBM. We'll be bringing the app to Android and iPhone users across the globe soon."

Earlier, Samsung had announced that the messenger would be available on the company's app store that comes preloaded on its Galaxy series of Android devices, and on the Google Play Store, across the African continent. Samsung had also agreed to join marketing efforts to showcase BBM for Android to customers and to mobile users across Africa. 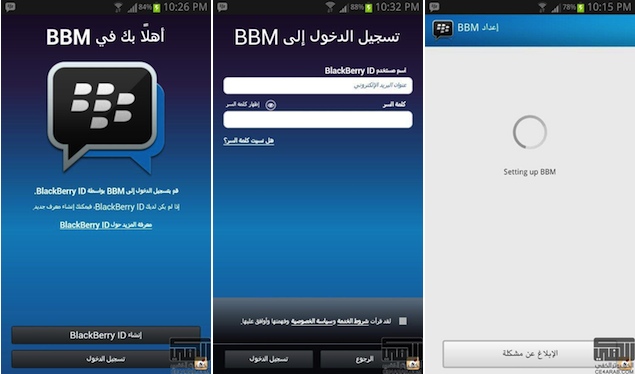 Incidentally the installation file (APK) for BBM's Android version has also leaked on several forums. However, it's being reported that the app doesn't work unless the user's BlackBerry ID is whitelisted by BlackBerry. It's worth pointing out that BlackBerry had invited a small set of users who'd registered with BlackBerry Beta Zone to try out the Beta version of the cross-platform BBM app on their Android device before the app was released to the public.

Previously, Alex Kinsella of BlackBerry had posted on Twitter that BBM for iPhone had already been submitted for Apple's App Store approval.

Landing pages for BBM for iPhone and Android had also appeared accidentally and pulled later.

BlackBerry had announced plans to extend BlackBerry Messenger (BBM) to Android and iOS in May.

Presently, BlackBerry Messenger or BBM allows BlackBerry users to seamlessly exchange texts, audio, videos and pictures with each other. However, a number of cross-platform mobile messaging apps including WhatsApp, WeChat and Line have taken over as preferred choices since they are available on a variety of platforms. When it comes to the iPhone, BBM would also compete with Apple's own iMessage platform that allows users who own Apple devices to send each other free messages over a data connection.
Comments