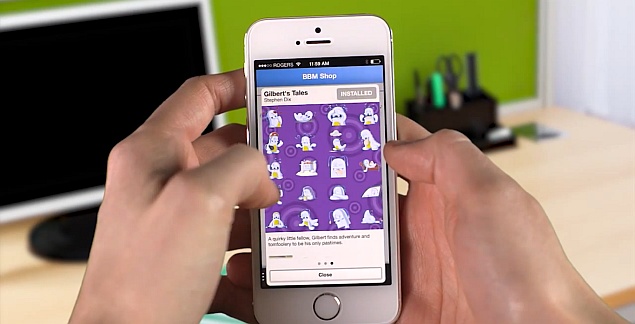 BlackBerry, as promised in early March, has added stickers in its BBM Chat service. The Waterloo-based firm is also increasing file sharing limit from 6MB to 16MB, and adding photo-sharing support in group chats.

Starting Tuesday, BlackBerry Messenger or BBM will offer "larger, bolder and more expressive images than emoticons". David Proulx, Senior Director, BBM at BlackBerry in the blog post announcement said, "Stickers are another great example of how we're making the BBM experience more engaging and fun for our customers. Stickers let you personalize your chats and strike the right chord with people around the world who rely on stickers in chats when they connect with colleagues, family, friends, peers and partners."

The updated BBM app with sticker support is now available to download for Android, BlackBerry and iOS users from their respective app stores. Notably, not all the sticker packs are available to download free of charge from the BBM Shop. For BBM users, the new update will offer a free pack of stickers that includes variants of the popular BBM emoticons.

Each sticker pack will include 20 to 25 stickers created by some popular artists including CosCat, Gilbert's Tales or Bubble Bot and others. WWE or World Wide Entertainment is also "planning to give away a free sticker pack to its fans through BBM" in order to promote its upcoming WrestleMania 30 event.

In addition to stickers, the BlackBerry Messenger users now have the ability to share photos in multi-person chats. The images will be seen as a thumbnail, which can be tapped to open the full-sized image. BlackBerry has also as BlackBerry has increased the file sharing limit from 6MB to 16MB.

BlackBerry additionally notes that sharing images on multi-person chats is not available for 'BBOS' users (which would including handsets running BBOS 7.1 or below). The company added that BBOS users will only be able to receive, and not send, the high quality 16MB files.