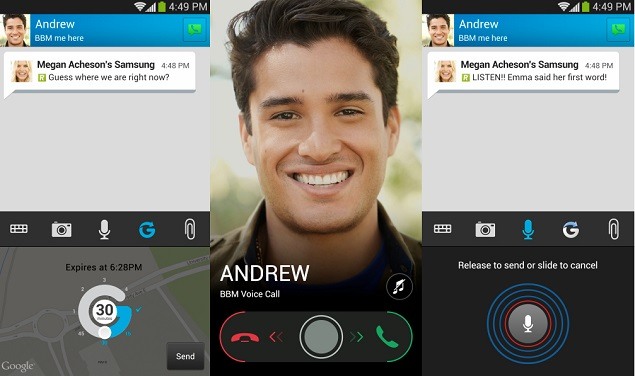 BlackBerry will be soon rolling out its latest update for its BlackBerry Messenger for its Android, BlackBerry 10 and iPhone users. Specifically, Android and iPhone users will be getting version 2.0 of the BBM app with the update, while BlackBerry 10 users will get the BBM v10.3 update. The biggest new additions, are the much awaited BBM Channels and BBM Voice features - BlackBerry OS users got the former in November 2013, and the latter in July 2013.

"Earlier, we wrote about some of the features we're working on for BBM in 2014. Today, we're excited to be adding those great new features and more to BBM that users on iPhone, Android and BlackBerry** can enjoy. When the update becomes available later today, these new features will give you more ways to chat and share than ever before on BBM," stated the official BlackBerry Blog on Thursday.

The other major update, BBM Channels, enables Android and iPhone users to chat with other BBM users on a topic of interest. BBM Channels includes a wide array of topics like products, hobbies, sports, entertainment, fashion, cars and others. The channels can be even created by BBM users based on the common interest of the community.

BBM will now also arrive with Glympse, a location sharing feature, which will let user's share their location for a limited period of time. The users can themselves choose the time frame for location sharing, after which, the location will become private again.

BBM users on Android and iPhone will now also be to easily share images, calendar items, contacts, voice notes, and more. Notably, the Dropbox cloud-storage service has also been integrated with BBM. This feature will let the users directly send files to others from the cloud storage service, and receivers can either download the shared file, or add it to their Dropbox accounts. 100 new emoticons will be also added in the update.

The BBM Groups have been also made larger, with support for up to 50 users. "You've been asking for larger BBM Groups and we've heard you loud and clear. This new version of BBM now includes 50-person BBM Groups so you can get more of your friends, family or team in on the action," noted the BlackBerry Blog.

Notably, BlackBerry OS5 and above will also be getting an updated app, but with some missing features (no location sharing or Dropbox integration).

Following is a short video detailing the upcoming updates in BBM.