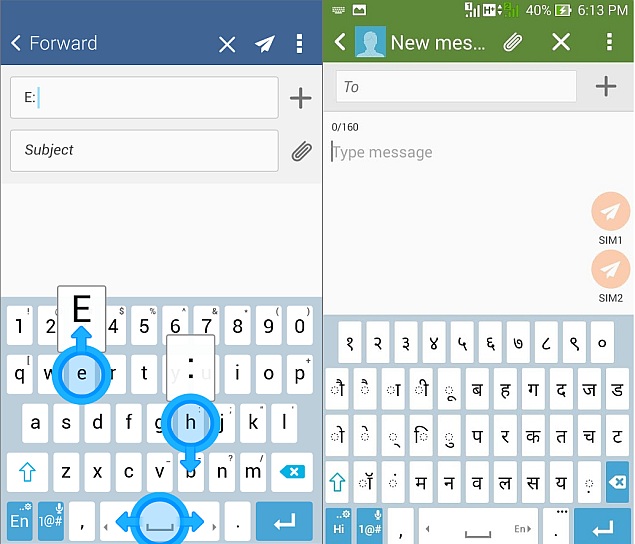 The recently launched app by Asus lets users write either by simply tapping on the onscreen keys or by using the swipe gesture across letters. Dictating text is also possible. Interestingly, these features are already present in another popular third-party app, SwiftKey.

However, what is special in the Asus Keyboard app is its ability to let user swipe down to type a special symbol or upwards for typing in capital sensitive letters. Flicking left or right from the spacebar on the keyboard changes the input method. A personal dictionary also comes as a part of the app that can save new words inserted by the user and show them as suggestions while typing.

All Android users will not be able to use the app as it is compatible with Asus devices only. The launch of Asus Keyboard is the first step by Asus to localise its ZenFone smartphones in the region. The firm has said that it will also be adding other local languages in the future along with other localised features based on user feedback.

The Asus Keyboard app is sized at 40MB and works on Asus devices running Android 4.2 Jelly Bean and later OS versions. Available to download from Google Play, the app has already received a decent amount of reviews and ratings.

"The Asus keyboard is a very user friendly device that supports only Asus gadgets. We are constantly working towards devising techniques that make use of our gadgets smoother for our customers irrespective of the language. Our new innovation enables finger flicking, fast swipe typing and intelligent learning and word suggestions that simplifies your typing needs significantly," said Peter Chang, Regional Head of South Asia & Country Manager - System Business Group - Asus India in a press statement. "Supporting multiple languages is the most important aspect of localisation. In view of our customers' feedback, we have introduced multi-lingual support. We believe that it is important to serve all of the users with diverse features and simplify the user interface significantly."