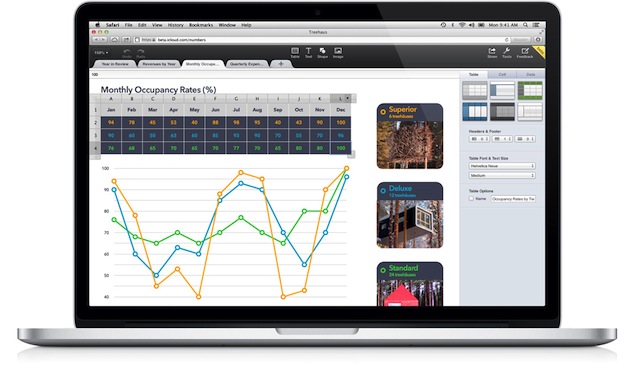 On Monday, Apple's popular suite of applications iWork, was officially announced in a third avatar. After OS X and iOS, the suite comprising Pages, Numbers and Keynote is now available as a web-based application on iCloud.

The service works much like other online services such as Google Drive with browser based web-applications. At the end, iWork is a fully functional browser version of the desktop based office suite. The service will be available on Windows and Mac devices alike and will be supported on Internet Explorer, Google Chrome and Apple's own Safari web browsers.

The service will come in handy for keeping your important documents, spreadsheets and presentations on the cloud. So you can save a document on iCloud and access and edit the file from any device (not necessarily yours). While you have access to your documents remotely, you are also heavily dependent on the iCloud servers. However, this point is true for all cloud computing solutions.

The major advantage that the service will have over its competing options is certainly its interface. For users who are used to working on the iWork suite, it will certainly be more comfortable using Apple's web service. During the demo at WWDC, Apple's Roger Rosner showed how slick it was to add an image to a Pages document simply by dragging the image icon to the application in the browser.

What is interesting to note is that Apple has supported documents from competing applications such as Microsoft Word as well with iWork for iCloud. According to Apple's claims, despite being browser based, the web-based suite will be 'fully-functional' and going in line with what we saw at the keynote, we can actually believe that. It is interesting that the Keynote application can play back presentations right from the browser and that too with the same kind of fluid animations that we generally see on the desktop and mobile versions.

What makes the situation dicey are Apple's experiences with web services in the past. Mobile Me shut down and iCloud had a jittery start. Perhaps we can expect better experiences out of iWork for iCloud as Apple would have learnt from the past experiences.

Also, one will have to wait and watch how sharing with iWork on iCloud will work. Presently Google Docs lets you share a document with multiple people and set editing/reading permissions. With access certainly more universal in that aspect, it will be interesting to see whether iWork for iCloud incorporates something similar.

Apple announced that the beta version of the service will be available for developers immediately followed by a public release later this year. Further details about the official release were not disclosed. Apple also informed that new versions of the three apps for Mac and iOS would be made available later this year.