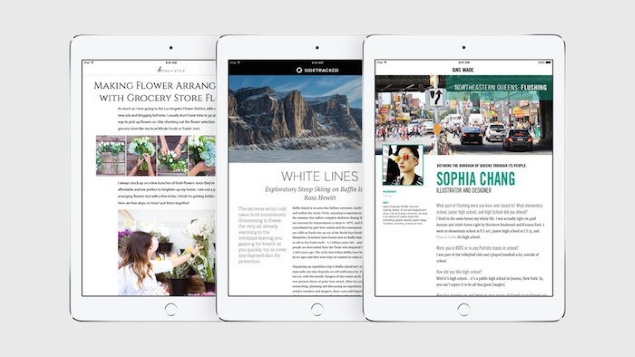 Apple has announced that one of the biggest new features on its upcoming iOS 9 mobile operating system will be News, a new and improved app for users to keep up with news and articles. The app will be launched with iOS 9 when it releases this fall.

It's interesting to note that News is very similar to the already successful Flipboard magazine-style news reader app. It presents news in a visually appealing magazine-like layout, and curates stories from over a million topics according to the interests of the user. The app is powered by the new Apple News Format, a digital publishing format that allows publishers to create detailed layouts.

"News seamlessly delivers the articles you want to read in a beautiful and uncluttered format, while respecting your privacy, because Apple doesn't share your personal data," said Eddy Cue, Apple's senior vice president of Internet Software and Services. "We already have nearly 20 publishers representing more than 50 titles joining us, including Condé Nast, ESPN, The New York Times, Hearst, Time Inc., CNN, and Bloomberg."

The Apple News app, which will replace the old Newsstand app on launch, will help publishers create visually appealing content exclusively for the platform. Content can include photos and galleries, audio, video, maps and rich interactions such as parallax and animations, and publishers can use this to offer users specialised stories and articles.

Apple has opened up registrations for publishers already, although additional publishing tools will be made available later this year, closer to the launch of iOS 9. The new mobile operating system will roll out around September 2015, and will be available for iPhone 4S and later, iPod touch (5th Generation), iPad 2 and later, and iPad mini and later.

US Army Website Hacked, Say Officials
Apple Now Makes Android Apps, Including One That Will Help You 'Move to iOS'