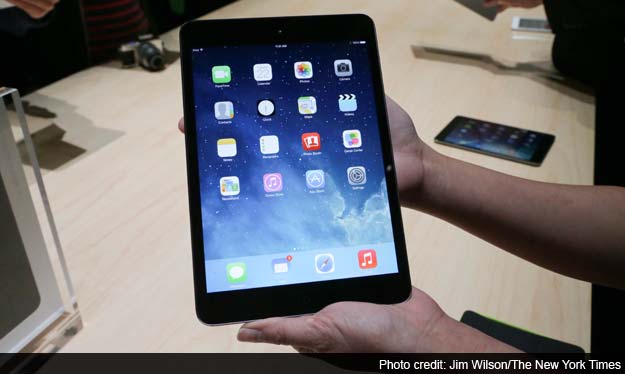 At an event meant to feature its latest iPad tablet computing devices, Apple on Tuesday took aim at one of rival Microsoft's biggest and once unassailable businesses, its Office software for tasks like word processing and spreadsheets.

Apple said iWork, a set of applications for Macs, iPads and iPhones that essentially duplicates what Microsoft's Office offers customers, will be free to anyone who buys a new Macintosh computer or mobile device from Apple. Each Apple app used to cost $10 apiece. The latest version of the Macintosh operating system, Mavericks, will also be free.

The pricing maneuver was perhaps the lone surprise at an Apple new media event at the Yerba Buena Center for the Arts. As expected, Apple souped up its iPads with faster processors and zippier Internet connections.

The company upgraded its iPad mini, the smaller tablet, with a higher-resolution, 7.9-inch display. The full-size iPad, with a 9.7-inch screen, was renamed the iPad Air, because it has a slimmer design and has lost some weight. The smaller iPad starts at $400 and the bigger iPad will cost $500. Both will ship in November.

"This is our biggest leap forward ever in a full-sized iPad," said Philip W. Schiller, senior vice president for marketing at Apple.

With its free software offering, Apple is capitalizing on dramatic growth in tablet computing sales and Microsoft's reluctance to offer Office for the iPad.

Tablets are devouring the PC market, which has long been Microsoft's playing ground. About 120 million tablets were shipped in 2012, nearly seven times as many as in 2010, when the first Apple iPad was released, according to Gartner, a market research company. IDC, another research company, predicts that sales of tablets will surpass those of PCs in the fourth quarter of this year and on an annual basis in 2015.

So far, Microsoft has had little success in that growing market. Its attempts to sell tablets have been failures, and Windows 8, which it has marketed as a software system for tablets and PCs, has gotten a chilly reception. What's more, Microsoft still charges $120 for people who want to upgrade from the older Windows 7 system to Windows 8.

That shift to mobile devices and low-cost software is why Microsoft is trying to shift from being a traditional software company into one that sells Internet services and devices, said Ross Rubin, an independent consumer technology analyst for Reticle Research. The company could reduce the upfront price for its software and charge people more over time for the services through subscriptions. And with the release Tuesday of Microsoft's new Surface tablets, the company is more aggressively marketing the online services available for it, like SkyDrive, a service for storing files on the Internet.

Microsoft's chief executive, Steven A. Ballmer, said recently that the company would bring a version of Office to the iPad and other touch devices, but the company has not said when that will be. It sells an annual subscription to Office 365 on other devices for $100 a year.

Asked about Apple's decision to give away its iWork apps, Heather Knox, a spokeswoman for Microsoft Office, said in a statement that a Web-based version of Office was the best free alternative to Microsoft's traditional Office applications. "They extend the Office experience you know and love with anytime, anywhere online editing and collaboration," Knox said.

The new iPad mini also gained a high-resolution Retina display. It new tablet costs $400 - $70 more than the previous iPad mini. But Apple said it would continue selling the older iPad mini without a Retina display for $300.

The iPad Air is about 20 percent thinner than the previous iPad and weighs 1 pound, down from 1.4 pounds. Both new iPads will include new chips, called A7 and M7, which Apple introduced last month in its latest high-end iPhone. The A7 is a faster processor with a new architecture that makes it better at multitasking. The M7 is dedicated to sensing movement, which could allow for new capabilities in software or games that incorporate motion, like a car racing game.

The iPads have an improved antenna system for faster Wi-Fi connections. They will come in white and silver and in black and gray, similar to the colors of the iPhone 5s (though the iPads will not come in white and gold like the iPhone). The iPad Air goes on sale Nov. 1, but the new mini will ship later in November.

The new iPads do not include the fingerprint sensor technology, TouchID, that Apple introduced in the iPhone 5s. Analysts say that may be because parts are in limited supply, as the iPhone 5s is selling so quickly.

The Mac computers have taken the back seat of Apple's business, but the company also released upgrades for some of its Mac hardware Tuesday. The MacBook Pro notebooks with Retina displays are now thinner and faster, with better battery life. The 13-inch version will cost $1,300, down $300 from its original price, and the 15-inch model will cost $2,000, down $200 from the original price.

Apple also said the high-end Mac desktop computer, the Mac Pro, which was introduced in June, will begin shipping in December, for $3,000.

Apple is No. 1 in the tablet market with about a 32 percent share, according to IDC. But the company faces fierce competition from companies like Amazon, Samsung Electronics and Google, whose tablets undercut the iPad in price. Samsung, the No. 2 tablet maker, is quickly gaining traction, with 18 percent of the market in the second quarter, compared with 7.6 percent in the period a year earlier, according to IDC.

But Carolina Milanesi, an analyst for Gartner, said she expected smaller tablets to continue gaining in popularity as the smartphone market becomes saturated.

"We expect this holiday season to be all about smaller tablets as even the long-term holiday favorite - the smartphone - loses its appeal," Milanesi said.