Apple Showcases 100 Apps and Games That Can Be Purchased at Rs. 10 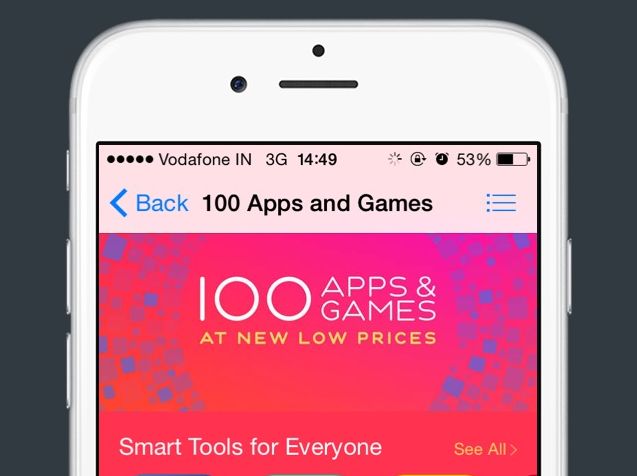 Apple's App Store has curated a list of a hundred paid apps that can be purchased for the low pricing of Rs. 10, shortly after they announced an alternate pricing structure that developers could use to target India and five other countries.

The app showcase can be viewed on iOS devices on the App Store, it features productivity tools and an impressive collection of indie and mainstream games that are worth it, at a price cheaper than a single-serve pack of instant noodles. Our picks would include Clear, which lets you set tasks and reminders, pdf reader app Goodreader, Scanner Pro 6, which lets you use your iPhone's camera as a portable scanner, scan documents and receipts into PDFs.

As for games, the lineup includes an ecelectic collection of indie hits like Limbo, The Room Two, Blek, Epoch 2, Framed, Badland, and Socioball.

This move is likely to significantly improve the average revenue per user in low-per capita countries like India, where apps are unlikely to be impulse purchases. Developers can also sell in-app purchases at subsidised prices.It will be interesting to see if this feature will be rolled out on the Mac App Store as well.

While making apps cheaper is one part of the equation, Apple still needs to open up its App Store to alternative payment options, such as gift coupons, debit cards, and online wallets. Credit card penetration in India is abysmally low only, with just 21 million credit card users according to a report.

Apple's App Store generated over $10 billion in revenue for developers in 2014, while Google's payout to developers is estimated to be over $5 billion in the last 12 months.