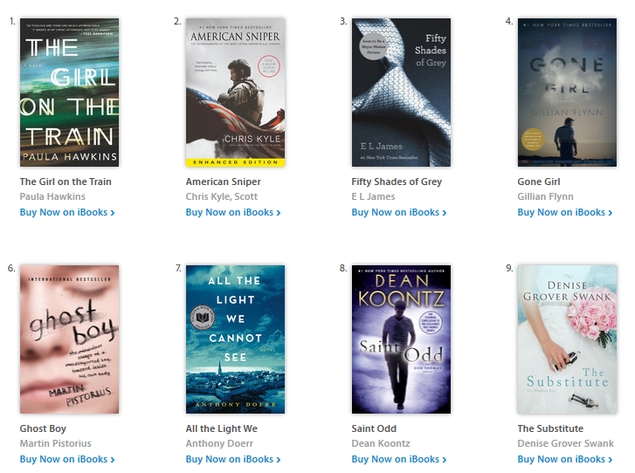 Apple's decision to bundle the iBooks app with iOS 8 and OS X Yosemite seems to have paid off. The company said as many as 1 million users are signing up for iBooks every week since the launch of iPhone 6 and iPhone 6 Plus.

Keith Moerer, director of iBooks, revealed the numbers at the Digital Book World conference in New York on Thursday. He was quoted by GigaOm as saying that since the launch of the iPhone 6 and iPhone 6 Plus, "We are seeing more of our book sales starting to come from the phone." Implying that the large-screen models open up a wider ebook reader base that's no longer limited to iPad tablet users.

Moerer said, "Whether an author chooses to self-publish or work with a small or large publisher, I'm very proud that our business terms are the same. The same 30-70 split [Apple takes a 30 percent commission on every ebook sale through iBooks] applies to a self-published author as well as an author published by the very biggest house. Because we're not a publisher ourselves, we work very closely with publishers and we view them as partners."

He also highlighted other ways in which Apple differentiates itself from Amazon. He spoke about how Apple doesn't charge publishers to have their books promoted on the iBooks store. "One hundred percent of our merchandising is editorially focused. We accept no co-op payments, no pay for placement," he said.

GigaOm reports that in a bid to attract more publishers to iBooks, Moerer announced his email address at the conference and said, "If you're not already working with iBooks, the best way to make that first contact is to send me an email, and I'll make sure that it gets to the right person and we'll get back to you."

Moerer also said the company has focused heavily over the last 18 months on the fiction genre, including romance, mystery, thrillers, science fiction and fantasy. Regarding non-fiction and illustrated books, sales of which have been low in the ebook market, Moerer said, "It's certainly slower than we would like, but using the iTunes music store as an example, jazz and classical music fans were the slowest to move from physical to digital over the years... we think that we'll see a similar progression with illustrated and children's books ... it will take some time."

In India, iBooks doesn't sell books, instead only offering that are free. We recently also compared the various ebook services in India, a comparison you should read to find out which is the best.