A podcast consists of a series of episodes that users can subscribe to, and receive new content periodically in the form of audio files (called audio podcast, or simply podcast) or videos (called video podcast, or vodcast). The word podcast is an amalgamation of the words "broadcast" and "iPod", since podcasts, when the term originated, were often consumed on iPods. Podcasts are also called "time-shifted radio", since they are similar to radio in medium, but give the user control in terms of when and where to listen.

Though the term podcasting was being used in popular culture as early as 2004, podcasts really became mainstream when Apple released iTunes 4.9 with native support for podcasts in July 2005. Apple made it really simple for people to discover, subscribe and consume podcasts.

When Apple released iOS, podcasts found themselves under the iTunes Store app, similar to the iTunes app under Mac or Windows. But the podcasts functionality was pretty basic, with no real way to discover & subscribe content from your iPhone, iPod Touch or iPad. Third-party apps like Instacast and Pocket Casts stepped in to fill the void.

With Podcasts app, Apple has addressed all shortcomings and provided a full-fledged podcasts experience on iOS. All this in a UI that's uniquely Apple, with convenient features like sleep timer thrown in for good measure.

Here are some screen shots and full set of features for Apple's new Podcasts app. Stay tuned for a full review of Podcasts app on NDTV Gadgets. 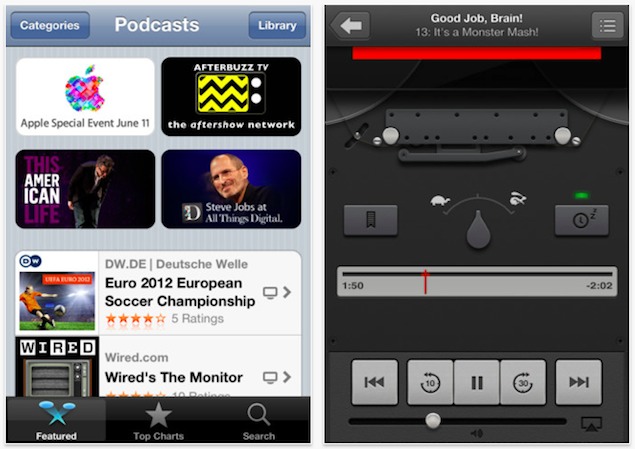