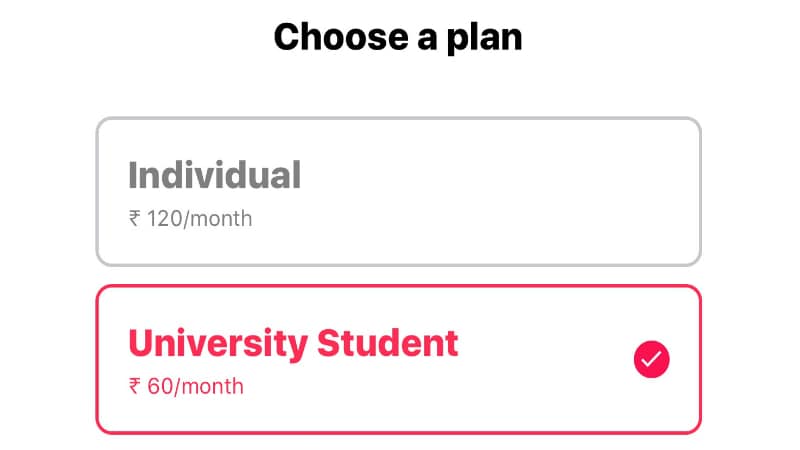 Apple first introduced University Student membership plan in Apple Music in May this year in seven countries, and now it has expanded its services to 25 more countries across the world including India. This membership offers a discounted subscription rate to those studying in a college or university.

Now, alongside the Individual and Family plans, users in India will notice a new plan called University Student when choosing their subscription plan in the Apple Music app. The Individual plan as we all know is priced at Rs. 120 per month, while the new University Plan is being priced at a discounted Rs. 60 per month. The Family Plan lets up to six people share the subscription, and costs Rs. 190 per month, like before.

To verify the eligibility of a student, Apple has partnered with a student validation service called UNiDAYS. Students need to enter their email address and name of the school/ university to verify their eligibility. Once verified, the University Student plan is activated for the subscriber at a discounted rate.

The authentication is not one time either. UNiDAYS regularly checks if the subscriber is still a college student while your Apple Music subscription is still active. If UNiDAYS finds that the subscriber is no longer a student or has been on the University Student plan for 48 months, it will automatically stop student pricing and switch the user to the full individual pricing plan.

This makes a total of 32 countries offering Apple Music's University Student plan. Earlier in May when Student Membership was first introduced, it was made available in the United States, Australia, Denmark, Germany, Ireland, New Zealand, and the United Kingdom.