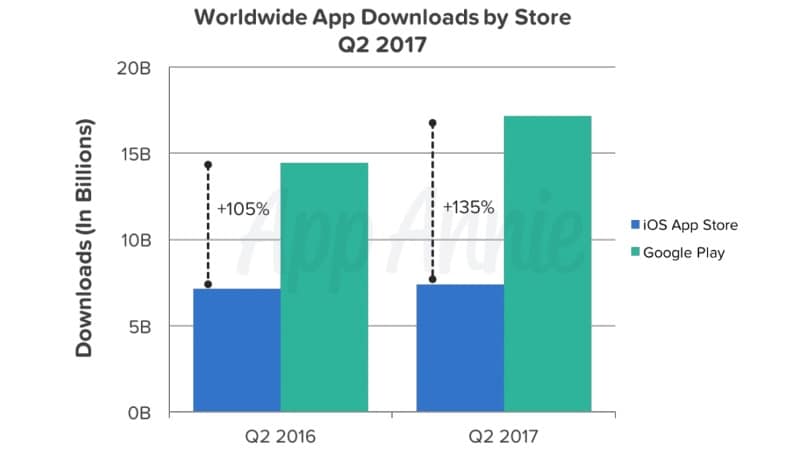 App Annie has come out with its quarterly report on downloads on both the App Store and Google Play. It finds Google Play downloads grew 20 percent year-on-year during Q2 this year and this surge in numbers was primarily driven by the increase in downloads from the emerging markets including India and Brazil.

App Annie says that much of this growth came from gaming and entertainment apps. The report also highlighted video streaming apps like Hotstar and JioPlay as some of the most downloaded apps. Notably, Brazil surpassed the US in Q2 to become the second largest market in terms of Google Play downloads after India. This increase was reportedly fuelled by communication and gaming apps.

"The downloads gap between Google Play and iOS has been widening significantly in the past two years, predominantly driven by emerging markets as the price of Android smartphones decreases and network infrastructure increases around the world. We expect this downloads trend to continue in the quarters to come," App Annie said in its report.

While Google Play downloads increased their lead year-on-year from 105 percent to 135 percent over iOS downloads, the latter continued to outpace the former in terms of consumer spend.

"Global smartphone and tablet owners continued to spend roughly twice as much money on iOS as they did on Google Play. That being said, both app stores saw significant growth in consumer spend year over year with iOS and Google Play growing 35 percent and 30 percent, respectively," App Annie said in its report.

On iOS, the downloads grew by 5 percent year-on-year and China has been said to be the force behind this growth. Even in terms of consumer spend, China has been declared as the strongest market, considering growth, for iOS with tier one cities like Beijing and Shanghai performing like mature markets in the country.

The global app downloads, across both Google Play and App Store, grew 15 percent year-on-year and nearly reached the mark of 25 billion in Q2 2017, as per the report. "With downloads growing at a rate of 15 percent year over year and spanning nearly every industry, it is clear that mobile apps are an indispensable part of consumers' lives," App Annie said.