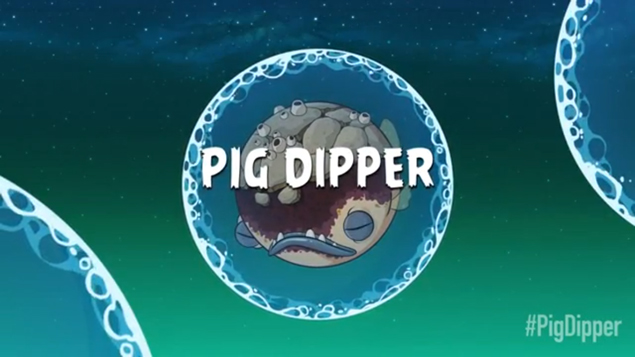 Users will now have to rethink their strategy for playing these levels as they'll be taking into account both gravity and buoyancy. New power ups in the flocking fraternity include a green bird that splits into a flying 'V' of five birds and has the ability to make pigs buoyant.

Players can also use the Pig Puffer to make all the pigs catch their breath, puff up and explode in their places. The Flock of Birds power up splits any bird into additional three birds for maximum destruction. So if you choose the little blue bird, they will split into six!

Then there's a Space Egg that explodes at one place flinging surrounding objects in any direction to kill the piggies floating in their boats. Players will find these power ups on the top left screen under a 'lightning bolt' icon. They will be loaded with 3 turn for each power up. 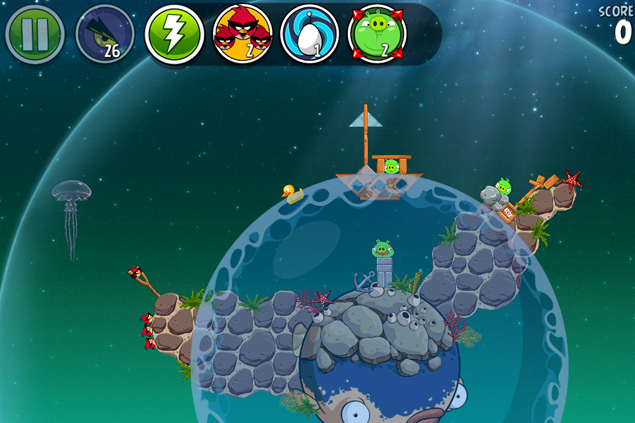 Those who've played Angry Birds Seasons will recognise the orange bird that can be puffed up at the target to destroy it. Some levels have an anchor holding the boat at bay via a rope with the other end tied to TNT barrel. The trick is to go for the rope that frees the barrel making it buoyant and exploding when it reaches the surface. Rovio cautions players to "get ready for the ultimate underwater boss level".

The game has also added additional aquatic elements to the now green space environs such as floating jellyfishes and a strange mermaid noise in the background. The water is  encompassed by the gravitational field and decorated with corals, aquatic plants, stones and even a rubber duck floating on the surface. In certain levels, the stones seem to be resting on a giant blown up fish at the centre.

The space version isn't the only one to feature water in the Angry Birds franchise. Seasons received a similar update incorporating underwater physics, making it the toughest game in the franchise. 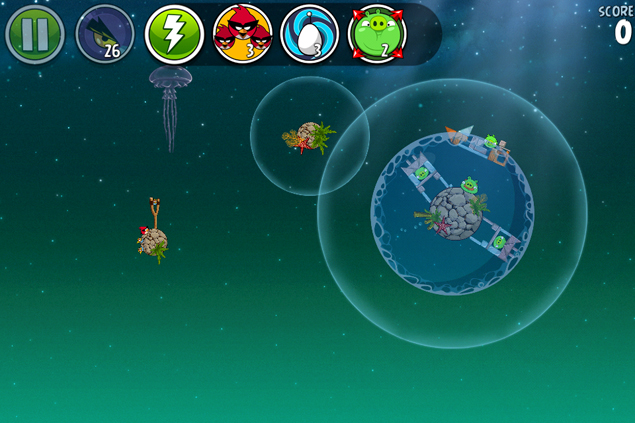 Rovio has been very diligent with updates to all Angry Birds games in the franchise. The previous update for Angry Birds Space featured a fiery new chapter with 20 themed levels based on the Mars Curiosity rover.

Speaking of space, the Finnish gaming studio launched a new title in the franchise, Angry Birds Star Wars blending the classic Angry Birds stories with the characters, themes and settings of the Star Wars saga, ranging from the deserts of Tatooine to the depths of the Death Star.

It also came out with Bad Piggies with the green swine being the lead protagonists of the game. It became highly popular within just three hours of its launch.

In December last year Angry Birds Rio was updated to introduce South American-themed powers. Players could have their birds don a fruit hat and shake things up with "Samba Burst" confetti, put explosives across the level with a "TNT Drop," and cause general mayhem with other new power-ups.

Just like every update, we hope users will love the latest underwater physics implemented in Angry Birds Space as well. Dive into the video and check out what we're talking about!