Amazon Says Alexa Users Now Have Access to Over 12,000 Skills 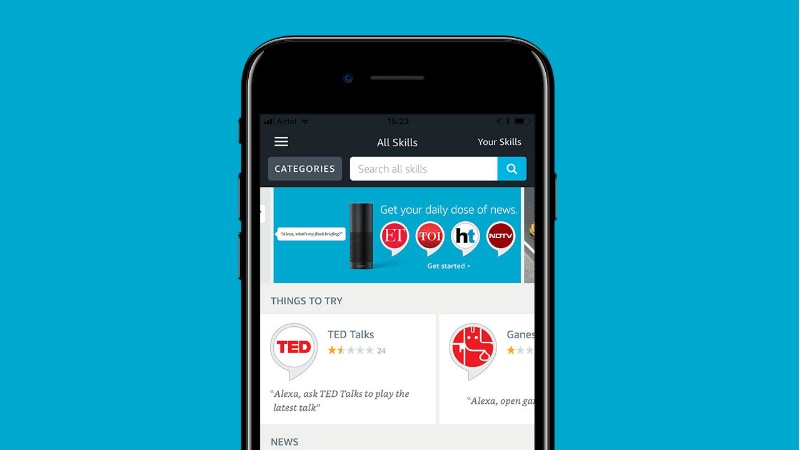 Amazon India on Tuesday announced that it has added over 1,000 skills to the Alexa skills store since the launch of Echo devices and Alexa store in India on October 31. This takes the total number of skills available for Indian customers to 12,000. This translates to (on an average) one new Alexa skill added every 90 minute, Amazon says. The new skills span 20 categories, including Health, Business & Finance, News, and Lifestyle. The skills highlighted by Amazon include the likes of Rock Paper Scissors and Merriam-Webster Word of the Day, among others.

Within 60 days of Alexa's official launch in India, Amazon claims to have added 1,000 new Alexa skills for Echo users in the country. At launch, the store had around 11,000 skills available - most notably offered by developers such as Ted Talks, Saavn, ESPNCricinfo, and Zomato. Amazon claims that Alexa's natural language understanding and AWS cloud support allow it to continually learn more skills easily.

To enable a skill, users can go into the Alexa app and browse for skills, and click Enable to activate the skills on their devices. Alternatively, users can directly ask Alexa by saying "Alexa, enable " to enable it. The Alexa companion app is available on Google Play and Apple App Store. It is also available for desktop browsers.

The highlighted skills in the new rollout include Ambient Sounds - Ocean Sounds in Music & Audio, interactive games like Rock Paper Scissors, education skills like Merriam-Webster Word of the Day, the Help me Sleep health skill, as well as Hanuman Chalisa and Inspire Me in Lifestyle category.

The Alexa team has been also been hosting developer workshops in cities in India to engage with the country's developer community.