Amazon Offers Paid Apps Worth $220 for Free on Christmas 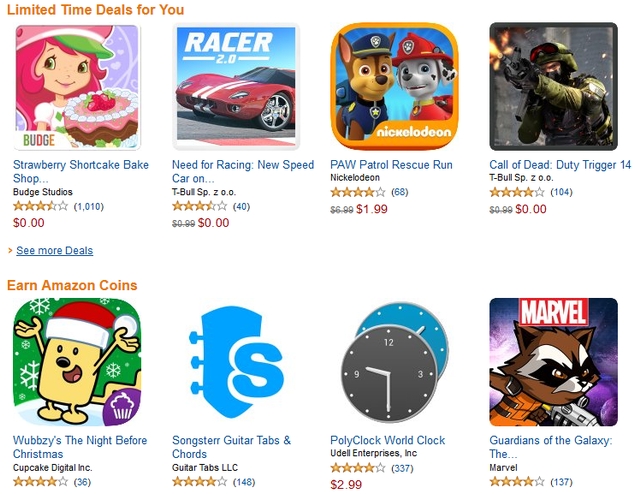 Amazon announced several Christmas offers and the biggest discounts are on digital content. The e-commerce giant is offering paid apps worth $220 (roughly Rs. 19,000) for free and announced up to 80 percent discount on Kindle books. Other deals are more US-centric, with discounts on Kindle e-readers, Kindle Fire tablets and Amazon Fire TV.

As usual, the best deals Indian users can grab involve apps. These Christmas app deals will go live on December 24 and will last till December 26. Amazon regularly offers paid apps for free, which we've covered here and here. These promotions usually appear on Fridays and end over the weekend. This time, Amazon claims that it will offer the "largest Free App of the Day bundle" ever.

Amazon says the bundle includes games from developers such as Halfbrick Studios, Rovio Entertainment and Sega of America, "which range in price from $0.99 to $64.99, all for free - saving customers up to $220".

Here is a list of all apps on sale:

Amazon is also offering a 30 percent discount on purchase of Amazon Coins, which are available in some regions such as the US (but not in India). Amazon Coins can be used to purchase apps, games and for in-app purchases (such as card packs, gems or gold in games).

Amazon also said that till the end of December and into the New Year, "customers will find 50-85 percent discounts on titles from developers like Disney, Gameloft and Sony Pictures Television".

You can follow the instructions here to install Amazon Appstore on your Android device. You can get these paid apps for free by visiting this page.

From Christmas Day and through the New Year, Amazon also plans to discount several popular ebooks on the Kindle store. The company claims that ebooks from authors such as James Patterson, David Baldacci, Rick Riordan, Sandra Brown, Kristin Hannah, Jeff Kinney and Barbara Freethy will be available at up to 80 percent discount. You can check these deals (updated daily) here.

Other discounts include up to 50 percent off on select holiday and kids movies and TV shows such as Polar Express and Home Alone. The full list of these US-specific deals can be found here.

Last but not the least, Amazon is also offering discounts on its hardware range. The company is offering $20 off Amazon Fire TV (now $79), $25 off Fire HD 7 (now $114), $20 off Kindle (now $59) and $20 off Kindle Paperwhite (now $99). Although these deals are US-only, you can get these gadgets shipped to India via package forwarding services.