Amazon Disables Its Original iOS App in India, Customers Required to Switch to New App or Use Website

If you already have the original Amazon app on your iOS device, you’ll be taken directly to the Amazon.in website once you open the app.

Amazon created two apps earlier, though the original one is no longer in works in India

Amazon has finally disabled its original iOS app for customers in India, and is now asking them to either switch to its new 'Amazon India - Shop and Pay' app or use the Amazon.in website to shop from their Apple devices. The new change comes several months after the US e-commerce giant placed a splash screen on its older iOS app encouraging users to switch to the new app that includes support for scanning Unified Payments Interface (UPI) QR codes and sign up for the Amazon Pay UPI service.

If you already have the original Amazon app on your iOS device, you'll be taken directly to the Amazon.in website once you open the app. This means that you will no longer be able to make any purchases through the existing app.

Prior to the latest update, the older Amazon app was showing a splash screen that was warning users about its disappearance by saying, “Support for this app will stop soon.” The banner, however, included a button to dismiss the warning, which is no longer available. Instead, the new change has replaced that dismiss button with a link that reads, “Shop on Amazon.in website.” 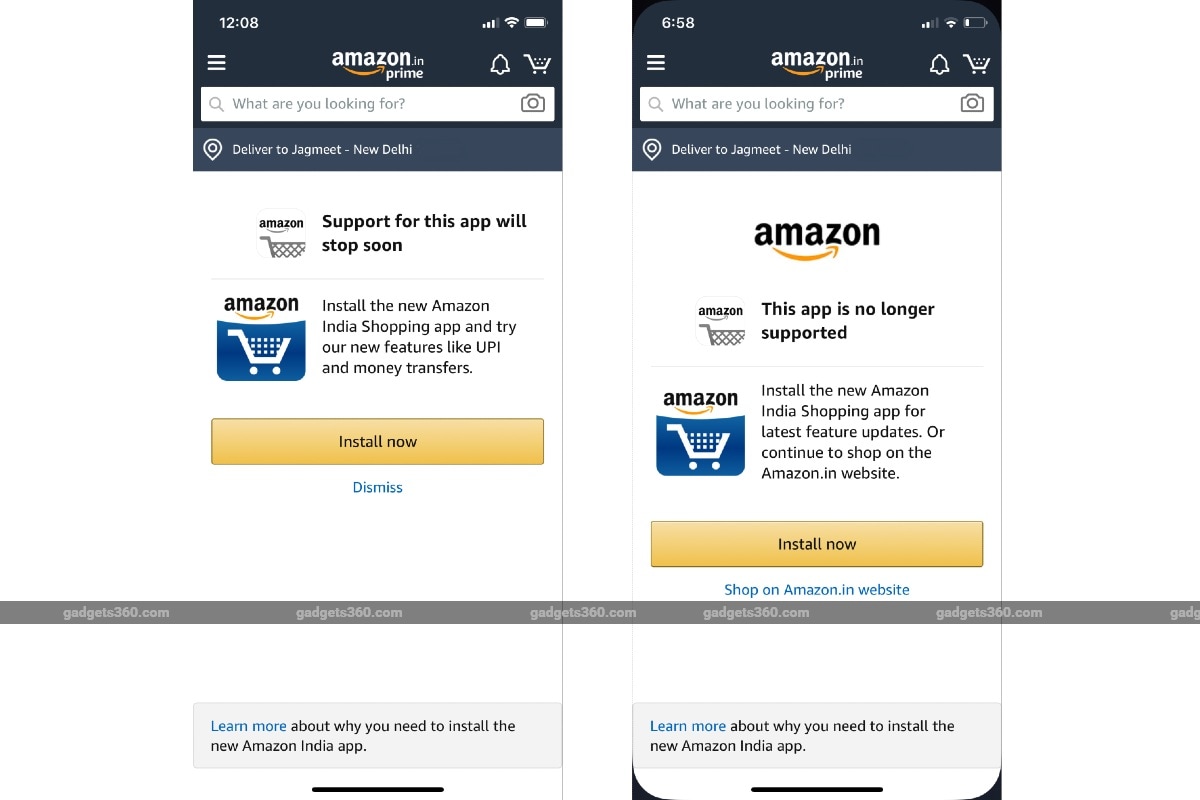 As per the details provided by Amazon on its support page (accessible only through mobile devices), the new change is aimed to “enhance the shopping and payment experience of iOS customers.” The company has also assured customers that by switching to the new app, their existing shopping history, subscriptions, payment instruments, and addresses will be automatically migrated.

An email sent to Amazon India for a comment on the update didn't elicit a response until the time of publishing this story.

It is important to point out that references of the new Amazon app for iOS customers in India are there from as early as January. The new app also co-existed on the App Store with the original one initially. However, Amazon eventually hid the original app from the App Store for customers in India and made only the local version available for download.

If you have the original 'Amazon - Shopping made easy' app on your Apple device, you should uninstall it as it is of no use now. You can download its new version from the App Store, 'Amazon India - Shop and Pay'. Alternatively, you can continue shopping on Amazon by accessing its website from your iPhone or iPad.

Jagmeet Singh Email Jagmeet
Jagmeet Singh writes about consumer technology for Gadgets 360, out of New Delhi. Jagmeet is a senior reporter for Gadgets 360, and has frequently written about apps, computer security, Internet services, and telecom developments. Jagmeet is available on Twitter at @JagmeetS13 or Email at jagmeets@ndtv.com. Please send in your leads and tips. More
OnePlus Nord to Feature 32-Megapixel Dual Selfie Camera Setup: Report