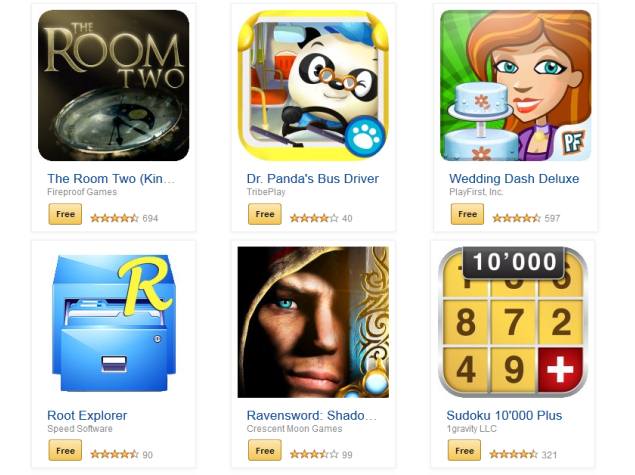 Amazon is offering a number of premium Android applications worth $100 for free for two days via the Amazon Appstore for Android. This promotional offer is valid for June 27 and June 28, as part of the free app of the day programme.

The offer includes games like The Room Two, Sonic the Hedgehog 2, Real Shanghai Mahjong and Sudoku 10,000 Plus and more. The list of 31 apps also includes some other productivity apps like 2Do:TodoList, aCalendar+, MyBackup Pro, Splashtop Remote Desktop HD, and more.

Earlier this month, BlackBerry Ltd had agreed a licensing deal with Amazon.com Inc that will let the Canadian smartphone maker offer some 240,000 Android applications from Amazon's app store on its line-up of BlackBerry 10 devices this fall.

The move allows BlackBerry to add a vast array of consumer-focused apps to its devices, and to focus on developing enterprise and productivity applications, the Waterloo, Ontario-based company said in a statement.

The apps will be available on BlackBerry 10 devices from this fall, when the company rolls out the BlackBerry 10.3operating system, the statement said.

The move is the latest by the smartphone pioneer to streamline its focus as it attempts to reinvent itself under new Chief Executive John Chen as BlackBerry phones have lost ground to Apple Inc's iPhone and Samsung Electronics Co Ltd's Galaxy devices.
Affiliate links may be automatically generated - see our ethics statement for details.
Comments