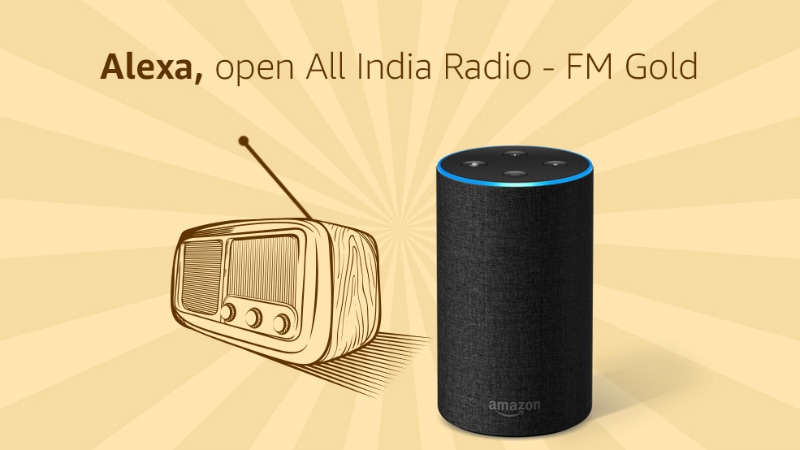 Making voice assistance closer to Indian users, Amazon on Tuesday announced that it now offers access to over 350 radio stations through Alexa. The latest change comes alongside the ability stream music from services such as Amazon Prime Music, Gaana, Saavn, and Hungama Music. Amazon Alexa users can listen to live broadcast of 17 All India Radio (AIR) stations in 14 Indian languages as well as access hundreds of other private radio stations from India and across the globe from the TuneIn and myTuner integration, the US e-commerce giant highlighted in a press note. The new move commemorates the World Radio Day that takes place annually on February 13 to celebrate the existence of radio.

Amazon says that with the availability of 17 All India Radio stations, users can leverage Alexa to listen to all the popular options, including Vividh Bharati and FM Gold. There are also options such as Radio City with 14 Alexa skills ranging from Radio City Sufi to Bollywood Mix and Deepam, the Radio One skill to provide live radio stations from Delhi, Mumbai, and Bengaluru.

You can need to have the All India Radio, Radio City, and Radio One skills enabled in your Alexa app to listen to the newly added radio stations from an Amazon Echo model or any other compatible devices. You can take a look at all the available radio station skills by visiting the Alexa Skills Store.

Once you have the skills enabled in your Alexa app, you simply need to say "Alexa, play" or "Alexa, open" followed by the name of your favourite radio skills. You can also call specific stations such as "Alexa, open All India Radio Bangla" or "Alexa, play Radio City Tamil" to stream music from the available radio stations.

Further, Amazon Alexa comes with TuneIn and myTuner skills to let you listen to hundreds of available radio stations not just from India but across the global regions. You can pick BBC Radio 2 for your favourite music tracks or get international sports updates through ESPN Radio or BBC Radio 5.

Notably, the TuneIn is enabled in the Alexa app by default. You, therefore, just have you say, "Alexa, play BBC Radio 2 live from TuneIn" or "Alexa, open ESPN Radio." You can also say, "Alexa, what radio stations do you have" to have a list of all the radio stations available in your Alexa app.

The newest addition is indeed a step ahead by Amazon Alexa to make the competition tougher for Google Assistant. Last month, Amazon announced that over 100 million Alexa-enabled devices have been shipped globally. This was significantly fewer than the mark of 500 million Google Assistant devices -- the growth is, of course, majorly due to the mass-level presence of Android devices. Moreover, Google is aiming to have its voice assistant on one billion devices soon.

Zomato Says Working With Restaurant Partners to Address Their Concerns