Amazon Alexa Can Now Be Set as Default Assistant on Android: How to Do It

Alexa, the artificial intelligence (AI) powered voice-based virtual assistant that was initially exclusive to the Amazon Echo family before being released on other devices including Android and iOS smartphones, is now getting deeper into Android. It can now be set as the default assistant on your Android device. This is something similar to what Microsoft offered through its Cortana assistant last year. Also, the change could ultimately give you a reason to move away from the default Google Assistant that is almost all-pervasive on your Android hardware and even let you make payments using your voice.

To make Amazon Alexa as your default assistant on your Android, you need to make sure that you have the latest version of the Alexa app on your Android device. You can download the app directly from Google Play or visit APK Mirror to download its APK file. In our case, the app carries client version 1.24.201688.0 and bridge version 2.2.207539.0.

Once you have the latest Alexa app on your Android device, go to Apps > Default > Assist & voice input and then select Amazon Alexa after tapping the Assist app option. After that, your device will ask you to allow the Alexa app to read information about apps that are in use on your system, including information visible on your screen or accessible within the apps. This will be followed by a permission request screen - specifying that Alexa will hear your requests, control smart home devices, and get location-relevant results. You need to hit the Allow button that screen to begin the action. 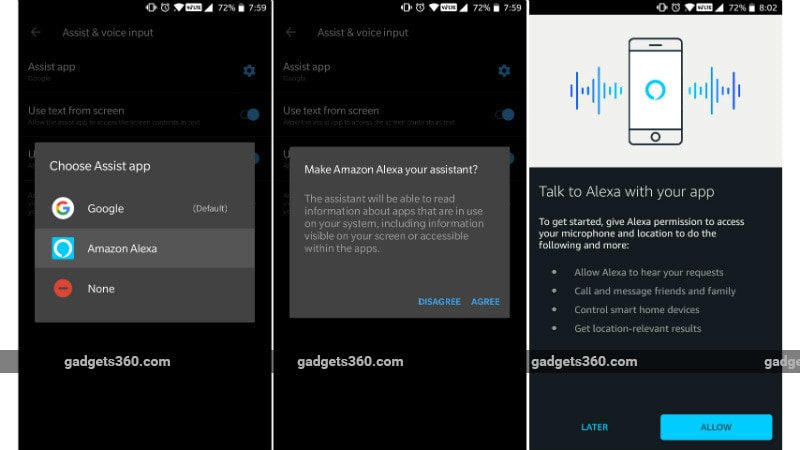 After allowing necessary app access, Alexa is ready as your default assistant. You need to long-press the home button on your device to activate Alexa for your commands. This means that you can't use "Alexa" hotword or squeeze the edge of the phone, as in the case of the Pixel 2, to trigger Alexa. Also, the use cases of Alexa as the default voice assistant are initially limited if we compare them with the features offered by Google Assistant. Alexa, for instance, doesn't allow you to make voice calls or send messages simply by passing voice commands.

Having said that, the newest development finally brings the ability to let you have Alexa as the default assistant on your Android device. Alexa notably came out of the box on a handful of smartphones in the past, including the HTC U11 and Moto X4 in certain markets. However, with the new change, you can also speak with Alexa with at a glance right on your device.

If in case you want to go back to the past and bring Google Assistant back for all your operations, you just need to select Google as the default Assist app.

Amazon Alexa Can Now Be Set as Default Assistant on Android: How to Do It
Comment