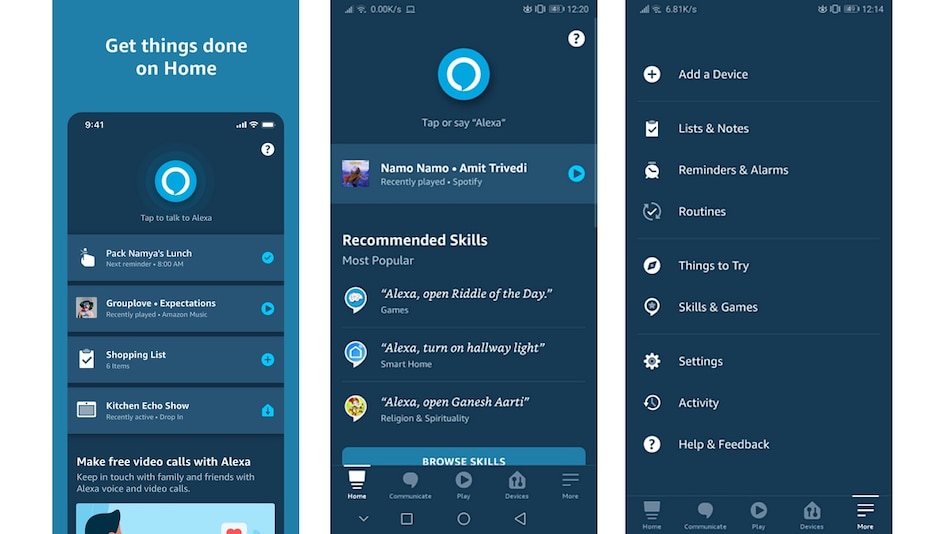 The updated Alexa app moves the Alexa button to the top

Amazon's Alexa app has been revamped with a new homescreen and updated navigation options. The development was shared by the company through a press release stating that the new homescreen will give direct access to the most frequently-used app features. The update will be coming to both Android and iOS devices and Amazon says it is rolling out the update worldwide over the next month. The Alexa app brings Amazon's voice assistant to phones that by default use Google's voice assistant, or their own, as well as on iOS devices that use Siri.

Amazon says the update brings more personalised features to the Alexa app. The revamped homescreen will now show personalised suggestions based on what the users care about most as they continue to use the app. The Alexa button has been moved to the top of the homescreen from the bottom, which, as per Amazon, makes it easier to find it and start talking to the voice assistant.

New users will get suggestions on how to get started with Alexa and use it for various things like playing music or manage their shopping list. The menu or “More” option that was originally at the top left of the screen that brings up additional options has been moved to the bottom right. The tab now brings options like “Lists & Notes”, “Reminders & Alarms”, “Routines”, and more.

This overhaul has been done to provide simpler navigation and easier access to the most important features of the app.

The update is being rolled out worldwide and as per the company, should reach all users over the next month. It states that all users should get the update by late-August. It will be available to download from the Google Play store or App Store when it is available.

At the time of writing, we were able to spot the update on an iOS device (iPhone X) but not on Android. Looks, like Android users in India will have to wait a bit longer.