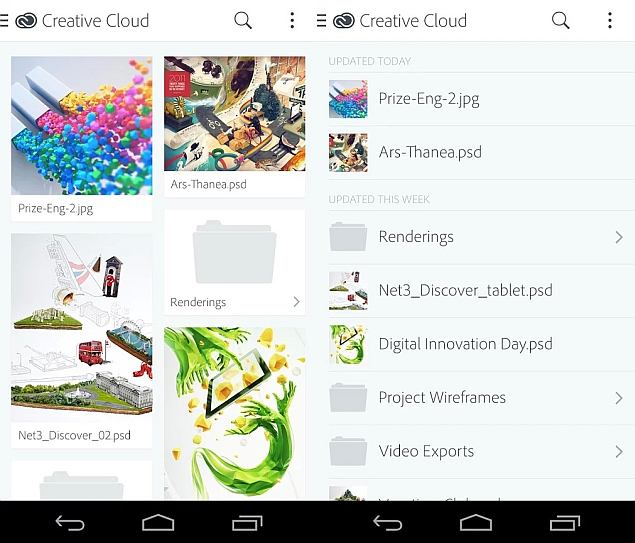 Adobe, shortly after introducing its streaming Photoshop version to Chromebooks, launched its Creative Cloud app (preview) for Android on Sunday.

Labelled as 'Preview' on Google Play, the Creative Cloud app lets users manage and preview their Adobe Illustrator, Photoshop and other files stored in the Adobe cloud storage that came with their Creative Cloud subscription or free membership. The app also allows users to upload their files through the app.

"Part of your free membership, this app connects your mobile devices to the Creative Cloud and unlocks new tools in your favorite apps. It also allows you to browse and preview your PSD, AI and other design files stored in the cloud," reads the app listing page.

The Adobe Creative Cloud for Android is in preview stage, and the company says it "does not support all the features of Creative Cloud", and will see the roll-out of new features in the near future with updates on a "regular basis".

The company also announced that it has acquired Aviary, developer of popular photo editing app by the same name, and mobile SDKs for the delivery of creative apps. Adobe said it will integrate Aviary's SDK with the forthcoming Adobe Creative SDK, a software library that will "enable developers to tap into Adobe's creative technologies to build mobile apps and drive new connections between mobile devices and Adobe Creative Cloud desktop applications and services."