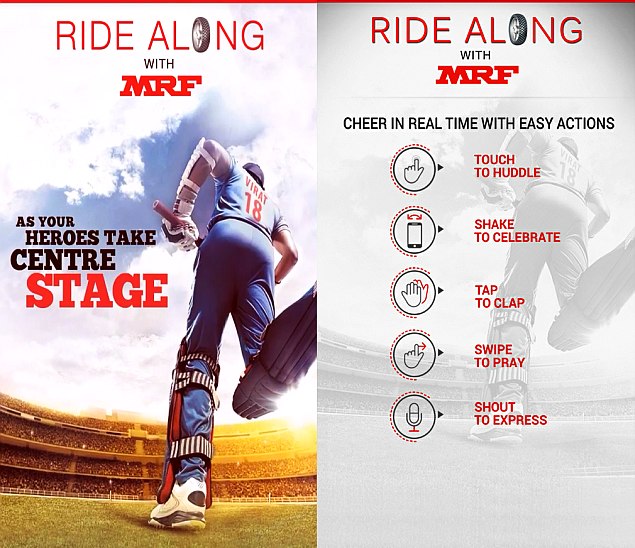 Ace cricketer Sachin Tendulkar has launched a real-time app conceived, created and hosted by leading tyre-maker MRF for fans to cheer the Indian team at the World Cup that started Saturday.

Available both on Android and iOS platforms, the "Ride Along - Cricket Fan" app seeks to give fans of the Indian cricket team a feel as though they are in the stadia themselves during the tourney in Australia and New Zealand.

"While the last World Cup was in India, this time Indian fans will not get a chance to experience the action live. Most of them will be glued to the TV screens," said Koshy K. Varghese, executive vice president for marketing.

"MRF wanted to give these fans a chance to feel as if they were in a stadium. So we built the 'Ride Along - Cricket Fan App'," Koshy said, calling it the first "real-time, second-screen" fan engagement app for cricket.

"While other apps give you staple things like live scores and commentary, our app gives you a chance to applaud for Virat Kohli when he hits a century, or pray for Team India when it's in trouble, with thousands of others - all in real time," he said.

"This is unlike anything cricket fans have ever experienced before," he said.

MRF, that has had a long connect with cricket, also seeks to give the casual viewers a chance to cheer for Team India - wave the flag with pride, pray for during tough situations, clap for a spectacular performance and shout their lungs out to egg them on.

For the cricket fanatics it has trivia, polls and quizzes, besides caricatures of cricketers. It also gives fans a chance to win prizes, the company said.

"The idea of second-screen engagement is not new to India. But it has not been used for cricket before," said Sandip Maiti, chief executive officer of xperience Commerce - MRF'S digital agency.

"Today, fans are always connected with their friends through social networks and chat messengers. We wanted to give every fan the opportunity they need to fuel conversations around cricket," he said.

"This app gives you 'fun-sharable' content during a live match that can be used by fans on Twitter or Facebook or any other platform they choose to converse on. With this app, you can truly get the experience of a stadium in your living room."

Alibaba's Jack Ma Seeks to Reassure Employees over US Lawsuits
IT Exports From Hyderabad to Reach Rs.64,000 Crore This Year