The activities highlight the challenges WhatsApp faces in preventing abuse in India, its biggest market with more than 200 million users.

WhatsApp clones and software tools that cost as little as $14 (roughly Rs. 1,000) are helping Indian digital marketers and political activists bypass anti-spam restrictions set up by the world's most popular messaging app, Reuters has found.

The activities highlight the challenges WhatsApp, which is owned by Facebook, faces in preventing abuse in India, its biggest market with more than 200 million users.

With fervent campaigning in India's staggered general election, which concludes on May 19, the demand for such tools has surged, according to digital companies and sources in the ruling Bharatiya Janata Party (BJP) and its main rival, the Congress party.

After false messages on WhatsApp last year sparked mob lynchings in India, the company restricted forwarding of a message to only five users. The software tools appear to overcome those restrictions, allowing users to reach thousands of people at once.

Divya Spandana, the social media chief of the Congress, and the BJP's IT head, Amit Malviya, did not respond requests for comment.

Rohitash Repswal, who owns a digital marketing business in a cramped, residential neighbourhood of New Delhi, said he ran a Rs. 1,000 ($14) piece of software round-the-clock in recent months to send up to 100,000 WhatsApp messages a day for two BJP members.

"Whatever WhatsApp does, there's a workaround," Repswal said during an interview at his small, two-bedroom house.

Reuters found WhatsApp was misused in at least three ways in India for political campaigning: free clone apps available online were used by some BJP and Congress workers to manually forward messages on a mass basis; software tools which allow users to automate delivery of WhatsApp messages; and some firms offering political workers the chance to go onto a website and send bulk WhatsApp messages from anonymous numbers. 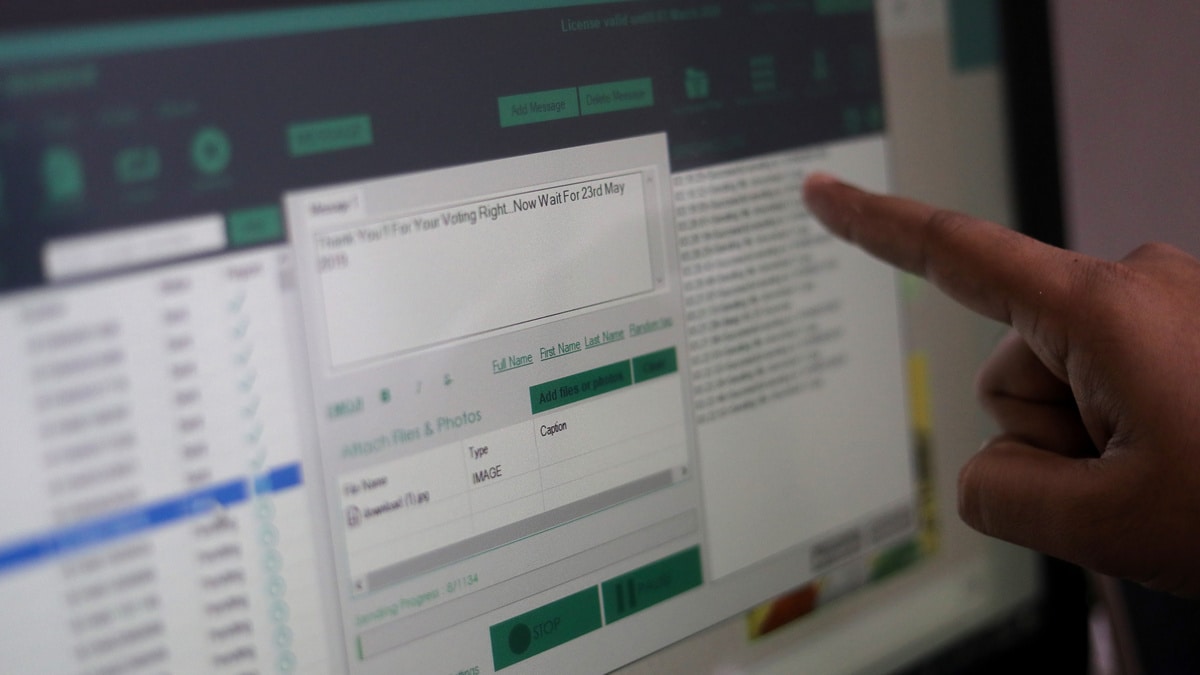 At least three software tools were available on Amazon.com's India website. When purchased by a Reuters reporter, they arrived as compact discs tucked inside thin cardboard casings, with no company branding.

WhatsApp declined a Reuters request to allow testing such tools for reporting this story.

"We are continuing to step up our enforcement against imposter WhatsApp services and take legal action by sending cease and desist letters to hundreds of bulk messaging service providers to help curb abuse," a spokeswoman said. "We do not want them to operate on our platform and we work to ban them".

WhatsApp clones
Modified versions of popular apps have become common as technically-savvy hobbyists have long reverse-engineered them. Tools purporting to bypass WhatsApp restrictions are advertised in videos and online forums aimed at users in Indonesia and Nigeria, both of which held major elections this year.

For Indian politicians, WhatsApp, Facebook, and Twitter are key campaigning tools to target the country's near 900 million voters.

Two Congress sources and one BJP source told Reuters their workers used clone apps such as "GBWhatsApp" and "JTWhatsApp", which allowed them to cut through WhatsApp's restrictions.

Both apps have a green-colour interface that closely resembles WhatsApp and can be downloaded for free from dozens of technology blogs. They are not available on Google's official app store but work on Android phones.

WhatsApp describes such apps as "unofficial" and says its users can face bans, which means the company can block the account associated with a particular mobile number if it detects unusual activity. Some Congress workers said they did not care.

"WhatsApp occasionally bans some of these numbers, but the volunteers would use new (mobile) sim cards to sign up," said a Congress member with direct knowledge of the activities.

In Mumbai, a person in the social media team of a senior BJP candidate said no restrictions on JTWhatsApp meant his team could easily send forwards to up to 6,000 people a day, as well as video files containing political content which would be far bigger in size than allowed on the official WhatsApp service.

Reuters was not able to ascertain the overall scale of such activities and found no evidence that BJP and Congress leaders officially ordered workers to campaign this way.

"Business sender"
In New Delhi, digital marketer Repswal said he would typically charge Rs. 150,000 ($2,161) for a month's service for creating digital content, providing a database of mobile numbers and then sending 300,000 WhatsApp messages.

A person can add many mobile numbers in a field and compose messages with pictures. Using a so-called "Group Contacts Grabber" feature, the user can also extract a list of mobile numbers from a particular WhatsApp group with a click of a button.

Repswal didn't name the two BJP members he worked for, but in a demonstration for Reuters, added dozens of mobile numbers in the software, typed a test message saying "your vote is your right" and hit "send". Then, his WhatsApp web version started delivering the messages almost robotically, one after the other.

Business Sender was "not supported or endorsed" by WhatsApp and was developed by "Tiger Vikram Mysore INDIA", its system properties said.

A member of the software support team at Business Sender, Rajesh K., declined to identify the developer by his real name, but said the tool was designed in Lebanon about four months ago and takes advantage of what he called a "loophole" in WhatsApp's system.

"This is not rocket science or fabricated software," said Rajesh. "There are hundreds of such software available."

In April, when a Reuters reporter responded to a text message with an "Election Special" offer of sending 100,000 "bulk WhatsApp" messages for Rs. 7,999 ($115), he was invited to an office in a dusty industrial area of Noida in northern Uttar Pradesh state.

"How many messages you want to send, tell us: 10,000, 1 million, 2 million," a representative asked, while showing a black-coloured, password-protected website they use for sending bulk WhatsApp messages.