What's Wrong With FaceApp, the Latest Creepy Photo App for Your Face

FaceApp is an app for ruining your face. It morphs you into an old (or in my case, an even older) person. It can change your appearance to make you look more masculine or feminine, maybe. Take a photo with a neutral expression, and it will force you to smile. It is an app built only to please those who have really wanted a new way to play roulette with their own face.

The app uses neural networks to try to keep the results photo-realistic, FaceApp founder and chief executive Yaroslav Goncharov told TechCrunch in February. "Adding a smile may look like a simple modification on the surface but, in fact, is extremely difficult. Smiling is not just lips moving - the entire face changes in a subtle, but complicated, way," he said.

The app has been around for a few months, yet became suddenly popular in the United States over the course of the past few weeks. God knows why. 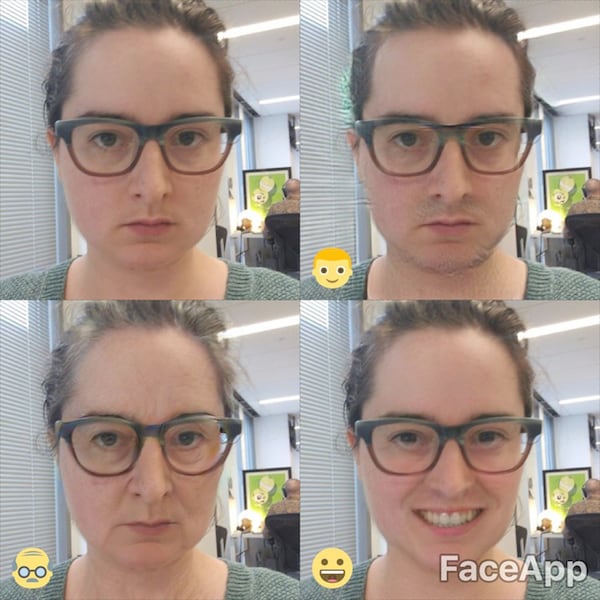 Maybe it's something to do with the unpredictability of FaceApp's transformations. Take mine, for instance: The "old" filter is actually pretty convincing on me, while the smile looks extremely wrong and bad. Bad transformations can be funny!

Anyway, people are having a lot of fun online with FaceApp this week. But just as FaceApp exists to "transform" your face into something worse, I would like to "transform" your temptation to use this app into a lack thereof. So here are some things that are wrong about FaceApp:

It had a racist "hot" filter
One of the transformation options for FaceApp used to be to make you look hotter. One of the things it actually did: The app lightened skin.

On Tuesday, FaceApp apologised and said they had temporarily renamed the filter to "spark." As of Wednesday, the option no longer appears on Android's version of the app.

"We are deeply sorry for this unquestionably serious issue," Goncharov told the Guardian in a statement. "It is an unfortunate side-effect of the underlying neural network caused by the training set bias, not intended behaviour."

The company later confirmed to TechCrunch that the data set it used to train the "hotness" filter was specific to FaceApp, which clearly didn't use a diverse enough data set to define "beauty."

"We can at least thank them for illustrating the lurking problem of underlying algorithmic bias in such a visually impactful way," TechCrunch wrote.

The transformations stack
Some have figured out that transforming an already altered FaceApp photo more than once can really create some disturbing images.

Privacy?
Whenever you're thinking about installing a viral app like FaceApp, privacy should be a concern. These apps are fun, but by installing them you're usually agreeing to give a third party some degree of information about you in exchange for that fun. And there's something about apps like FaceApp, that take, analyze and mess with photos of your face, that is good at cooking up a healthy paranoia.

To put FaceApp on my Android phone (for journalism), I had to give it access to in-app purchases, my photo and media files, my device storage and my camera. That's pretty straightforward for an app that needs to take a photograph of you to work and wants to save that photo to your phone so that you can horrify your loved ones.

Under "Other," there were some additional permissions I granted to FaceApp:

FaceApp hasn't seemed to raise as many red flags so far among the privacy-wary as another photo-altering app called Meitu did. But the privacy policy for FaceApp has still been creeping people out this week. According to that policy, FaceApp tracks and collects quite a lot of information about you from your phone when you use the app, both for the purposes of "improving the service" and to show you lots of ads. The question of how unusual that is for an app like this, though, is a different one.

What's Wrong With FaceApp, the Latest Creepy Photo App for Your Face
Comment