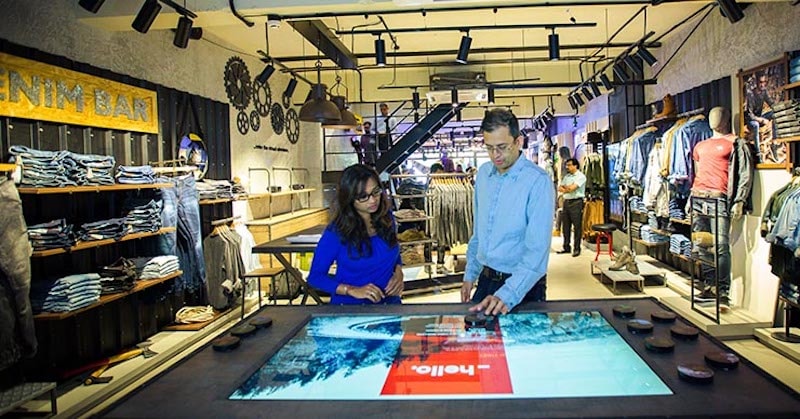 In Bengaluru's Indiranagar neighbourhood, online fashion retailer and brand Myntra has taken its first steps into brick and mortar. On Friday, the company launched a store for its private label Roadster, as it tries to improve the visibility of the brand. Roadster, which is near Rs. 600 crore in sales through online stores Myntra and Jabong, is the company's most successful brand, explains Ananth Narayanan, CEO of Myntra and Jabong. He adds that the new store will serve as an "experience zone" for Roadster.

"The goal is not to drive sales - we already have that - but to engage with the customer and as you'd expect from us, we're using a lot of technology to do just that," says Narayanan. “We've got a VR zone, multitouch screens, full-screen displays that mimic the Myntra app, and selfie zones."

Myntra has 14 labels together account for 21 percent of its revenue, with Roadster alone contributing 8 percent. Narayanan says that the goal is to build these private labels as actual brands, including having them sold in other offline stores, and to build that kind of brand presence, having an offline location to connect with customers is important. Depending on how this store launch plays out, Myntra would explore more offline stores, he adds, for its other brands such as All About You.

"With the store we really wanted to showcase what the Roadster life means," adds Gunjan Soni, the CMO and Head, International Brands Business at Myntra. "Otherwise there would be no point to VR. It makes you feel like you're right there with the ethos of the brand, but it doesn't directly sell. That's a big difference between us and an offline brand - for them, the primary focus of the store is about selling."

When you walk into the store, it looks fairly normal at first. There is no pick and go technology and it looks like any other apparel store. But the large Roadster posters on the walls have headphones connected to them, and shop staff will point out that the whole thing is actually a touchscreen. With a tap, you're browsing through Myntra's online catalogue, and if you find something you like, you'll be asked to enter your phone number, and you receive a link to that item, which will open on the Myntra app. This can be used to buy items that aren't in-stock inside the store.

"We have around 31 screens in the store, along with the big LED display on the front facing the street," says Narayanan. "Someone joked yesterday that it could be a Samsung showroom."

The store also has people armed with iPads who can help you to find items, or take care of the payments with a mobile PoS, doing away with the traditional bill counter.

Although there's no bill counter, at the back of the store there is a large desk with a giant touchscreen embedded in it. On either side there's a tray with hockey-puck sized discs, with different pictures of things such as products, and places that the brand believes typical customers will visit. Pick these discs up and you'll see a QR code like design on the other side. Place this on the screen, and it loads videos and other content related to that puck. This could be a quiz about the place, tips on what to wear there, or a video on how, say, Roadster makes its jeans.

You can move the puck around and the video moves on the screen as well, or you can interact with the content directly with taps and swipes. It's a little confusing, but Manohar Kamath, Head, Myntra Fashion Brands says that employees will be at hand to guide anyone who is having trouble. Kamath says that this kind of interactive content will be appealing to the young customers who buy Roadster products.

Nearby is the VR zone, where Myntra has rigged up four Samsung Gear VR headsets that you can slip on to watch a 360-degree video showcasing the "Roadster life". You're able to look around the video while a band plays on the road, airplanes rush overhead, bikers zoom past, and so on. It's a nice touch, certainly, but seems like one of the less impressive uses of technology in the store.

Narayanan however says that we should also remember that the technology can and will be upgraded. "This is not a static store," he says.

Kamath takes us through the rest of the store, and shows us an interesting hidden feature in the Myntra app. If you tap the Myntra logo thrice, it pulls up a barcode scanner. Scan any item in the Roadster store, and you're taken to its page on the app.

"So if you're shopping alone, you don't want to try out every piece of clothing, so how can you tell what it will look like on a person, right?" says Kamath. "So by doing this, you can see the model photo on the site and get an idea of what it looks like when it's worn, to help decide what to try."

At the same time, the touchscreens everywhere could be used to buy an item that's not in-stock in-store in your size, he adds, taking us upstairs to the second store of the shop. Here, there's a large green-screen to one side, and Kamath tells us that you can use this to take a selfie when you're trying new looks.

"You can change the background, make a short video clip of you walking the ramp or pose next to the Sphinx," he says. "Our Roadster customers are typically young - or young of heart - so this is a fun thing for them."

There's a large touchscreen on one side, which you use to set up the shoot - you're then given a preview on the screen, showing you and the background you're standing against, so you can move around, and once the timer goes off it records you.

Once that's done, you can enter your email ID to get a link to the video and photos, which can also be shared with friends. "So you could try out something and then instead of just taking a selfie at a bad angle, you can do this, and then send it to your friends who can tell you if it looks good or not," says Kamath. "And after ten minutes, the video gets played on the big-screen LED on the front of the store too, to make you feel like a star."

In the past, many other online companies have also tried to take the offline route, typically for less tech-savvy users. In the US, Amazon is trying to make a model where technology changes the way you shop. To a degree, Myntra seems to be trying this as well, but as of now at least, much of the technology being deployed is just another way of packaging brand videos and other marketing materials. Still, the Roadster store has only just opened, and Narayanan promises that it - and other stores - will continue to evolve, so there's still a chance that it will not just build on the brand, but also improve the experience of buying things.