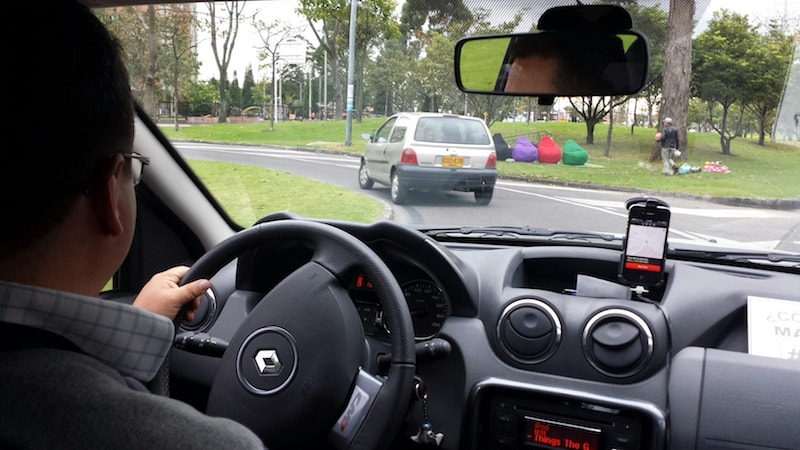 In a small coastal town on the Sea of Japan, Uber Technologies Inc. is deploying an unusual strategy.

The average age of an Uber passenger in Tangocho, population 5,914, is at least 70. Even stranger: most of these elderly customers don't own a smartphone, so they have to call someone with a device to summon rides. This isn't the typical target market. Go to any big city around the world with millennials glued to their gadgets, and chances are Uber will be there.

Uber is finding modest success in the hamlet, once known for supplying fabric to kimono tailors in the ancient capital of Kyoto, a three-hour bus ride away. Decades of depopulation have left Tangocho with mostly older folks. There's only one bus route, which weaves its way through the mountains every hour, making it difficult for residents to shop and take care of basic errands.

"Uber is becoming more important for me," said Miyoshi Azuma, 84, whose husband passed away in February and is trying to decide whether to renew her driving license in November. "My sons tell me to drive carefully. It would be terrible if I caused an accident at this age."

Tangocho is one of only two places in Japan where Uber's app can be used to hail a ride by a part-time driver-a service known as UberX in the US and UberPop in Europe. That's because ride-sharing services are only allowed in locations too small to support public transport. In the rest of Japan, only licensed drivers in black cars or taxis are allowed to ferry passengers, leaving Uber with an operation in Tokyo that's minuscule compared with San Francisco, London or Mexico City-even though Japan's capital is the largest taxi cab market in the world.

Uber is full of surprises these days. Since the San Francisco-based startup got off the ground in 2009, hard-charging Chief Executive Officer Travis Kalanick has rarely retreated from a fight, battling taxi franchises and taking on competitors and local governments. Then in August, Uber ceded China to Didi Chuxing, its biggest rival there, after losing more than $2 billion in two years. Kalanick also began pouring resources into making UberEats, the food-delivery service, a major new source of revenue across the globe.

So far, Kalanick is giving Masami Takahashi, Uber Japan's president, freedom to seek growth outside of major metropolitan centers, which represent the bulk of the archipelago's taxi and car services. If successful, Tangocho could become a template to conquer more places in the countryside, giving Uber enough momentum to mount an assault on the biggest prize: Japan's JPY 1.73 trillion ($17 billion or roughly Rs. 1,13,649 crores) taxi market.

"Transportation is a never-ending, pressing issue for people living in depopulated areas," said Ken Miyao, analyst at Tokyo-based market researcher Carnorama. "If Uber is actually able to contribute to folks in the rural area, over the long-term it will help to loosen regulations in a big way and may help them roll-out a proper ride-sharing service in big cities like Tokyo."

The seeds of Uber's entry into Tangocho were planted in the 1950s, when the number of inhabitants started declining from a peak of about 12,000. As Japan's post-war economy grew at a breakneck pace, demand for traditional clothing shrank as western garb became the norm. One by one, textile factories stopped and people left town. Izakaya bars closed. At the shuttered Kyotango Takeno Elementary School, stacks of dusty software boxes imprinted with Windows 95/NT were piled up in an abandoned classroom.

"Once the taxi company went under, a lot of folks lost the only way to go about their daily lives," said Hideyasu Nogi, a municipal employee who oversees transport planning for the region. "If you need toilet paper, what do you do? You can't go buy it. The bus stop can be kilometers away and over steep hills."

Nogi, 43, struggled for years to make sure aging residents had a way to get around. He bought a van with public funds two years ago and teamed up with a non-profit group to offer rides to residents, but the logistics proved impractical. The elderly often had little choice but to take the wheel themselves, resulting in fatal accidents like a recent one involving a 90-year old driver who killed a pedestrian.

When Uber's Takahashi sought out Nogi last year, the public worker was mesmerized by the app's ability to connect riders and drivers. Ignoring protests from the region's taxi association, he rolled out a pilot program in May. The non-profit found 18 drivers, and Uber taught them how to use the app. Now, Uber handles up to a couple dozen rides a day-a solid start, but not exactly a runaway success.

If it prevails in Tangocho and Nakatonbetsu, a town on the northern island of Hokkaido that also embraced ride-sharing, Uber could set its eyes on more than 500 other places in Japan that allow unregulated car services. Takahashi said talks are ongoing with dozens of municipalities.

"We're still in the learning phase, but as a first step it's really important that we're actually useful to the local populace," Takahashi said. "We're getting calls from towns, cities and prefectures asking if we can do this or that for their needs, and we feel really grateful for this."

While Takahashi is working to win hearts and minds in the countryside and impress the nation's regulators, a bigger question is whether that long-term approach can win over the boss. It's clear Kalanick is keeping count; a year ago, he tweeted: "Other great @Uber cities that recently passed Tokyo trip count: Sarasota Florida, South Bend Indiana, College Station Texas, Guwahati India."

Takahashi is betting that his middle-of-nowhere strategy will form the basis of a new operating model for places underserved by taxis, buses and railways. Given that societies are aging around the world, a successful rural ride-sharing business in Japan could be exported to other countries with poor or deteriorating transport services, he said.

For the residents of Tangocho, the Uber rides aren't just convenient-they're also becoming indispensable. Many of the trips are to hospitals, said Kazuhiko Azuma, who works at the non-profit overseeing driver safety and was involved in the earlier, failed van-transport program.

"It took us five years to get that van program running," Azuma said. "During that time, the people who were begging for transportation aged drastically, and died, or had to enter specialty care homes. I still think if we had managed to get it running sooner, we would have had a lot more vibrant grandpas and grandmas living longer lives."

Uber Japan will need more fans like that. Even though Prime Minister Shinzo Abe has touted the sharing economy as a way to bolster innovation, there aren't any signs that changes will be made to Japan's Road Transportation Act, which regulates taxi licenses.

And so far, the central government isn't in an accommodating mood.

In January, a bus accident killed 15 people, many of them students on their way to a ski resort. After coming under criticism that the private bus operator had lax oversight, the Ministry of Land, Infrastructure, Transport and Tourism proposed tighter regulations. Revised rules submitted to parliament this month are expected to pass with wide support.

"At a time when we're shoring up safety guidelines, it would be quite difficult for the government to make a move that runs counter to that," said Akihito Ohashi, an official at the ministry overseeing ride sharing. "Around the world, ride-sharing may be becoming more commonplace, but from the perspective of our ministry the only way forward is after more serious consideration."

Another question is how long Uber will stick with the program. It's hard to mask the fact that Uber is moving slower in Tangocho and Nakatonbetsu than in other nascent markets, especially Latin America. And big-city taxi companies aren't sitting still. Japan Taxi Co., a provider of fare meters and technology for the industry, already offers a Uber-like app that lets people summon one of Tokyo's 49,000 cabs and pay on their smartphone.

Nogi said he's aware that Uber might pull out if it decides there's no way to make money and spread its business across Japan. Still, he said the current strategy is the right one, because "once people experience the convenience first hand, they'll create enough pressure on politicians to allow Uber to operate legally."

"We have a saying: when in a hurry, take the long way around," Nogi said. "By taking it slowly, you'll get to the destination faster."