It's not often that one comes across an app that pushes the boundaries of what is possible on a platform. It's even more rare to find this kind of an app being made in India by a solo developer. Naadsadhana is one such app and it's been developed by Pune-based computer scientist and classical musician Sandeep Ranade. The simplest way to describe Naadsadhana is that it's an app that helps you train yourself in classical music.

But that can easily be labelled an oversimplification because not only does the app help you hit the right notes while singing, it also has a smart swaramandal (an auto harp) that's a vital instrument in classical music. However, it's an upcoming feature of Naadsadhana that pushes it from good to potentially magnificent.

Naadsadhana's third version will add an AI-driven tabla player that's capable of simulating the mahaul (atmosphere) of a concert. This is a pretty big deal. Tabla apps have been around for a while, but we haven't yet seen any app that can adjust the way the instrument is played based on how you're singing, similar to what we see in classical music concerts when artists improvise on the spot.

Sandeep Ranade, the developer, tells Gadgets 360, “This is what the third version of the app tries to bring about where the tabla has AI driving it, it understands what you're trying to sing what you're trying to play, and accompany you, appropriately as you would want.” This is the crux of Naadsadhana's upcoming third version, which Ranade plans to release in the next two or three months.

He adds, “See on stage what happens is you have expert musicians accompanying you… There is musical give-and-take, musical dialogue and creativity and spontaneity on stage and a hell of a lot of improvisation. And this chemistry cannot be recreated at home it in any way today.” 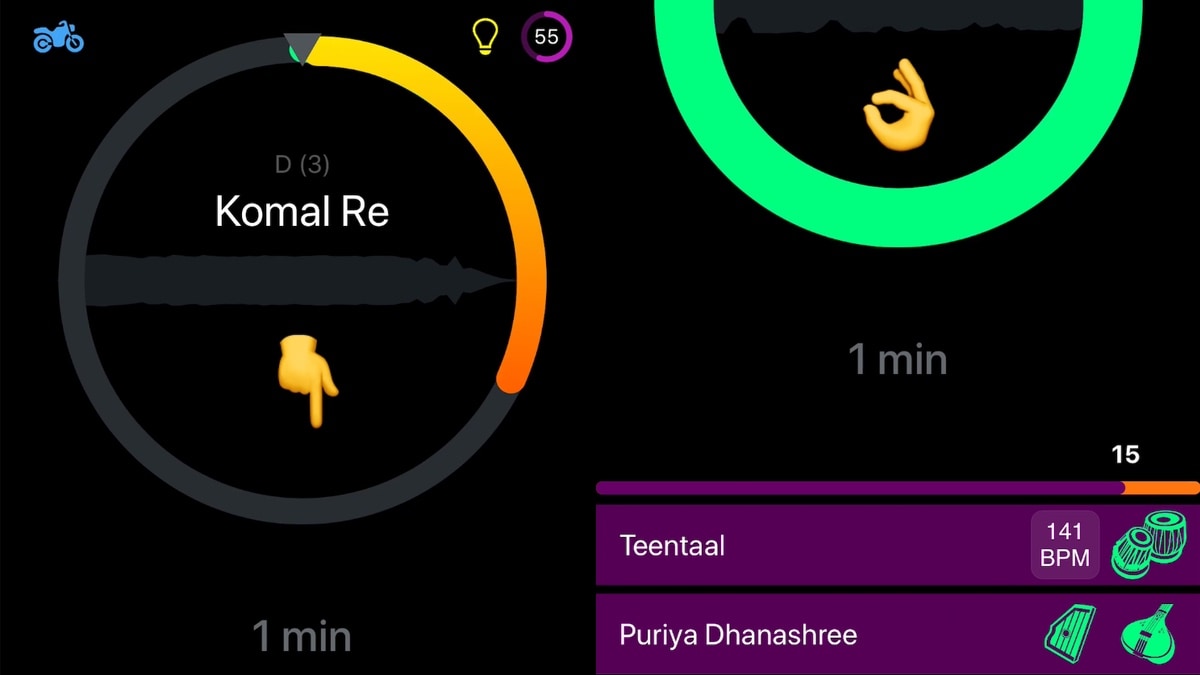 Not everyone can go on stage and start improvising in the middle of a concert. Every musical performance requires a lot of practice but you need to have a lot of experience and confidence to be able to improvise on stage. Naadsadhana will soon be able to help you get there.

“Now, here's the problem. On stage, I can do things because of that chemistry. Because of all of this amazing magic, I can do things I can think of things that I would have never otherwise done at home by myself. That is a very big risk, right? Because I'm now going to be singing things on stage that I I have never thought of or practice before. But if I am able to practice at that level, every day, in my own home, then I can bring my stage performance to a whole new level,” Ranade says.

He adds that the gurukul system of teaching classical music, where students and teachers lived on the same premises, allowed for better quality of music to emerge. Always having an expert tabla player, among other expert musicians, to practice with all day benefited students in many ways that are becoming increasingly rare today due to changing lifestyles, Ranade adds.

“So for people who really want to learn music who want to sing want to play, recreating that stage experience with that live interaction at home, even if I can get to 80-90 percent of that interaction that will allow my Riyaz to reach a level that was never possible before,” he says.

Ranade demonstrated this upcoming version of the app for Gadgets 360, where he sung a song using the highly acclaimed iTabla Pro app, followed by Naadsadhana version 3. The difference was noticeable even to untrained ears like that of ours. This is not to say that iTabla Pro is bad — it's a great app in its own right and was revolutionary when it released — but Naadsadhana will soon be able to do something that no other app has yet been able to.

The challenges of developing version 3

Naadsadhana is the only iOS app Ranade has made and developing these upcoming features was a ridiculously tough challenge. To understand how it was made, it's important to understand how the tabla spurs creativity in classical music performances.

Ranade says, “So the way that the tabla spurs creativity is by appropriately supporting you, in the right point in the rhythm cycle, when you're singing more enthusiastically, it will match that level of energy. When you're singing slower subtle phrases, it will still create that level of creativity and it will still give you variations, but while still reliably showing you what the time cycle is.”

He explains that singers and tabla players don't count matras, but listen for certain cues in every taal to know where they are in the time cycle. To allow Naadsadhana's tabla AI to get where it is, Ranade had to make sure that it could recognise over 20,000 such patterns and he says this number is going to keep growing.

Why Naadsadhana is not on Android

Instruments such as the swaramandal and the tabla are often played at incredibly high speeds, Ranade adds, which adds to the challenge for Naadsadhana. “To have a sound stack which is low latency becomes very, very, very critical here,” he says, referring to iPhone, iPad, and iOS as a whole. 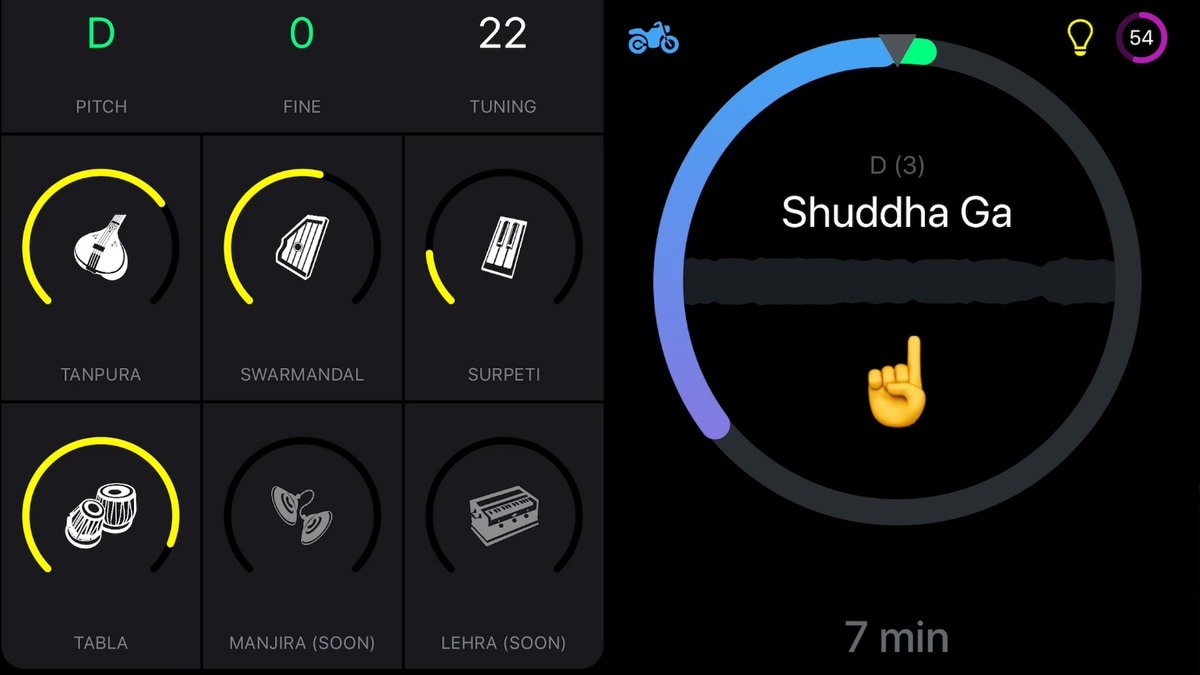 The settings screen from Naadsadhana version 3

This is why Naadsadhana is not on Android. “On Android, the technology doesn't exist today, the sound stack, the entire audio stack is so high latency. And this is a design problem, it's not going to be easily fixed with an update. It's a rewrite, really, and there are a lot of people talking about this latency problem all over the net,” he says. “But for iOS to provide this platform with such high fidelity, such low latency and amazing building blocks, this app would have taken me a decade or more on any other platform,” Ranade adds.

The precision tuner, which was the first major feature for Naadsadhana, relies on this low latency offered by iOS. It tells you when you're hitting the right notes when practicing classical music and when you're not. The app has four levels of expertise — beginner, advanced, expert, and perfect. It also assigns a score based on how often you hit the perfect notes, which helps you improve. This system wouldn't be around if there was a huge delay between when you sing and when the app detects your voice.

Similarly, the smart swaramandal — another big feature — needs low latency to be able to play the instrument at the exact time. Ranade has coded the entire app in Apple's Swift programming language.

Naadsadhana was priced at Rs. 2,499 when Gadgets 360 interviewed Sandeep Ranade, but it was made free for a limited time at the time of writing. With the upcoming version 3, the app will move to subscription pricing.

Further reading: Naadsadhana, Sandeep Ranade, Music
Pranay Parab Email Pranay Pranay is in charge of podcasts and videos at Gadgets 360. Over the years, he has written over 500 tutorials on iPhone, Android, Windows, and Mac. He has also written in-depth reported features on the intersection of technology and culture, reviewed fitness wearables, been the social media manager, started two podcasts, and produced several tech videos. He loves travelling, particularly to places not frequented by tourists. He keeps running half-marathons across the country and hopes to complete ...More
Quake II RTX Is the Classic Remastered by Nvidia, and It's Coming as a Free Download on June 6
New BSNL Prepaid Recharge of Rs. 389 Introduced for Foreigners, Includes Unlimited Calling