Talespin is a young Delhi-based startup that wants to place chatbots inside stores. Not online stores though - physical retail outlets. The idea, according to Talespin's product head Tanay Dixit, is to help bring some of the benefits of the online shopping experience - such as personalised recommendations - offline as well, at a low cost.

The idea was actually born when Dixit tried to go shopping for a t-shirt at Shopper's Stop, and after being shown a lot of different ones, he finally found something he liked, only to learn it wasn't available in his size. He realised that if there was a system to browse through the store's entire catalogue like you would an e-commerce marketplace, then he would have been able to get a better idea more quickly, and it could even have allowed him to place an order for the out- of-stock item, to be delivered to him. And so that's exactly what he set out to build.

Talespin is sold as a software-as-a-service product to retailers, so they can add the technology to their stores at a very low cost, and it uses image recognition and machine learning to build a catalogue of the various products that are available in their store.

"Most brands today already have photo catalogues of their products thanks to e-commerce, so they only have to send us a .ZIP file with these images and we can start training the system," Dixit explains. "It takes 10-15 days to do the training, and then we can also set up a chatbot that any customer can just walk in to the store and use, and you can deploy in just about a month."

You can quickly browse through a visual menu like you would on any e-commerce store, or you can use the chatbot, and tell it what you're looking for, Dixit explains. You can tell it that you're looking for a men's grey t-shirt with short sleeves, and you'll see cards showing you some options. From there, you can refine the selection further, for example, you could type that you want only t-shirts with a collar, and so on, until you narrow down on a single product. The bot can then immediately tell you if there is stock in your size, along with an item code, so you can then be directed to the correct product to try and then buy, or if it's not there, you can be shown similar alternatives, or taken to an ordering page. 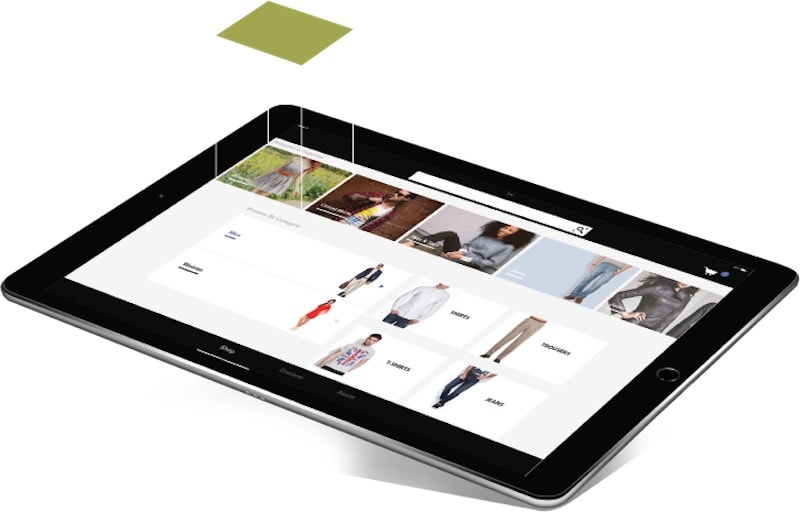 At $70 per store, or around Rs. 4,500, that's cheaper than it would cost to hire someone, but many people would still prefer to talk to a real person. At the same time, Dixit believes that this technology will be helpful in busy stores during sales when it can be very difficult to find staff to help you.

Conversational Commerce or Just a Lot of Noise

Although Talespin has so far deployed its solution at around 10 retailers in India - including Mohanlal Sons and a couple of national retail brands, whose names are currently under an NDA - in the three months since its launch, Dixit says that the company is actually looking to build a presence in Dubai and Europe, where the cost of hiring and training a store assistant is much higher than in India.

"Here, people are more interested in it as an assisted selling concept, but in the other markets they see it as a replacement tool," he says. "But here too, there are some definite advantages to a system like this. For example, in the CP Adidas, I asked for a Chelsea jersey, and they gave me a Manchester United one. That's not the kind of mistake the machine could make."

Talespin's image recognition algorithm can identify things like sleeves and collars, patterns, and even use the visual to identify different occasions a piece of clothing would be used for. And all of these tags are hooks that the chatbot can make use of too.

"We've been training our system, and for menswear alone, there are some 27 different attributes in the system," Dixit tells us. "Apparel companies have teams that manually do all this tagging, but because we're doing this algorithmically, it's much faster and much more efficient."

In fact, although Dixit can't reveal the name of the customer, one client also uses the system to identify which products are selling well, break them down to attributes, and use that information to help make sourcing decisions - even down to a per-store level. He adds that the service can also reduce the amount of time and money that goes into training new hires: "They only need to be able to use a screen, and speak well, and this can do the rest."

Data, Not GMV, Is the New Currency to Measure Success of Big Sales, Says Myntra

That said, Dixit admits that the system has to become more accurate to be foolproof. "Right now, it's at 94 percent accuracy on things like collars and sleeves, and 90 percent accuracy on western attire," he explains. "But with patterns on ethnic wear, it's more complex, and the accuracy is still only about 80 - 85 percent."

"Of course, the training data is based on your inventory, so after a couple of months of use it will become much more accurate for your catalogue," he adds.

The entire premise of Talespin's idea is the fact that people will be willing to use a tablet or another touchscreen device instead of asking someone for help in stores. Then again, it's a trend that has been happening in the service industry for some years now, so why should shopping for clothes be any different?