SwiftKey’s Goal for India is “Transcending the Boundaries of Language”

SwiftKey, which was acquired by Microsoft earlier this year, on Monday unveiled its transliteration engine which allows users to seamlessly type in the Roman script, but write in Hindi and Gujarati, along with "Hinglish" and "Gujlish" - and of course English - all the while seamlessly switching between the languages.

SwiftKey already offers keyboards in 22 Indian languages - something it launched last year - which Aarti Samani, the Indian Product Manager for SwiftKey - described as Phase 1 for the company in India. Samani, who had met Gadgets 360 in February last year, had demonstrated this transliteration feature which at the time could only work between English and Hindi. Now, the feature is officially live and has an added layer of Gujarati as well, and Samani says that we are now in Phase 2 for SwiftKey in India.

"For SwiftKey, India has always been an important market, and we've been working to improve our offering here," said Samani, "and now as a part of Microsoft, that has not changed for us. We are still committed, and Microsoft has a big presence in India as well, and so the roadmap remains the same."

When we first saw the English-Hindi demonstration last year, it already worked pretty well, but Samani dismissed it as “just transliteration”. The new app, she said, is much more powerful, and much more intelligent. 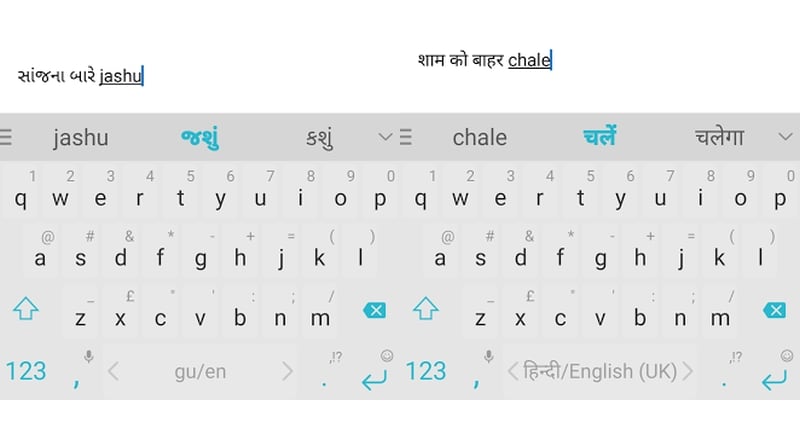 “[In the last year] we’ve added more languages, and now you can switch between them more easily and swiftly,” she explained. “The language model behind this is different. Earlier it was Hindi or English, and nothing in between, but now we have a model for Hinglish and Gujlish as well. It’s not just two languages but five.”

SwiftKey's app allows you to seamlessly switch between languages without having change the setting anywhere - you can switch between Hindi words, which are displayed in Devnagri, and English words, which are displayed in Roman, as you type, something that isn't possible with other keyboards that offer similar transliteration features. But more than that, according to Samani, a lot of the complexity arises from the number of different languages being processed, something that required a lot of development in artificial intelligence and machine learning, based on a huge amount of language modelling.

"This is the first time, in text input, not just in India, that you are able to type in multiple scripts, and multiple languages, simultaneously," she said. "The technology behind this is very complicated, and you have to recognise the language switch based on the word you have typed, along with the context. 'Chal, theatre chalte hain, the meeting was fantastic.' Now add another sentence in Gujarati, and suddenly it becomes very complicated."

"We're taking into account fat finger issues, corrections of spellings, but also tailoring to the user's writing style," she added. "In English the letter 'c' can be three or four different sounds - in our Indian languages, each letter has a different sound. So when you write coffee, there is no reason why an Indian person has to know the precise spelling - so we are correcting where the spelling is blatantly wrong, but not where a user has typed a phoenetic spelling. If you type cofe and I type kofi, both should be transliterated the same way, and this makes the work much more complicated."