Super Mario Run is now available to download on the iPhone, iPad, and even the iPod touch so as long as you have iOS 8.0. Android gamers will have to wait it out until next year, when Nintendo will finally release Super Mario Run on that platform. For the rest of us, here’s what you need to know to get the best out of Super Mario Run on iOS.

In Super Mario Run, Mario runs from left to right automatically. Tapping the screen makes him do a small jump. Hold the screen longer, and he jumps higher. That's all there is to it - you've just got to get into the flow and get the timing right.

Like every classic Mario game, your objective is to make it to the flagpole at the end of the level before the timer runs out. This is how the game plays in the World Tour mode — similar to classic Mario games.

Endless runners don’t have a definite end point, while Super Mario Run does, making it more of an auto runner than an endless runner. It might sound like semantics, but the difference exists and it's an important one. Also, just because there are levels doesn’t mean there’s no replayability.

If you like collecting every single coin in Mario games, you’re in for a treat. Aside from the usual gold coins, each level has three sets of special coins to collect — pink, purple, and black. Collecting one full set unlocks another version of the level, with the coins hidden in places that are more difficult to reach. Since Mario runs automatically, timing is crucial to collect them all. Otherwise you'll have to replay the level from the very beginning.

(Also see:  You Will Need an Internet Connection to Play Super Mario Run) 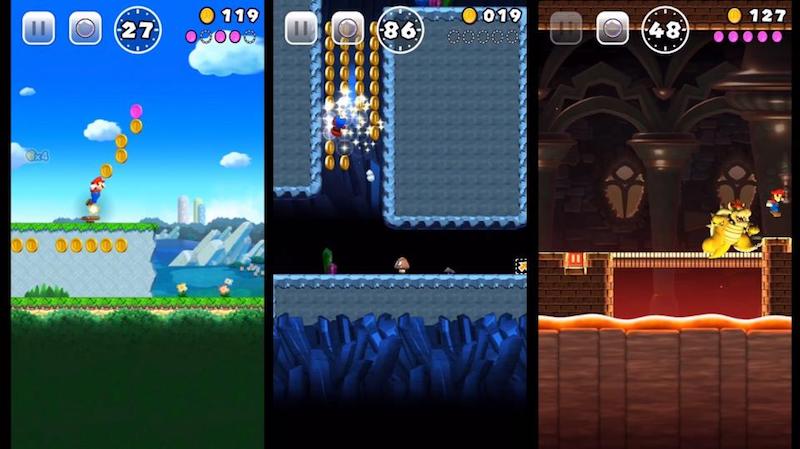 Much like New Super Mario Bros on Nintendo consoles, Super Mario Run uses bubbles. These let you rewind your progress in a level as far as you’d like, allowing you to collect a coin you missed. Keep in mind that the timer does not reset. This means that if you use too many bubbles or go back too far, you might not finish a level. As for finding these bubbles? Hit the blocks with a question mark to get these power-ups.

In Super Mario Run Toad Rally, your goal is to beat your opponent — which is essentially the performance data of another player - with style. What this means is, you won’t be competing in real time but against someone’s high score that’s visually represented as a character running across the screen.

This is known as asynchronous multiplayer. You won’t just be tasked with outrunning them though, there’s an audience to impress. Pull off stunts like fancy jumps and flips and toads — citizens of the Mushroom Kingdom - will join you. You can’t access this Super Mario Run mode without Rally Tickets, which can be earned by performing in-game feats such as clearing a level in World Tour mode.

Remember the coins and toads we mentioned? You can use them in Super Mario Run Kingdom Builder mode. This mode lets you make your own Mushroom Kingdom. It resembles a world map in other Mario games. You’re limited in what you can buy, by the number of Toads that you’ve impressed. Hit the requisite number of Toads, and you can use your coins to buy different items. There’s little in way of gameplay, but more by way of bragging rights, with cosmetic items such as green pipes, flags, and question mark boxes among others, to decorate your kingdom with.

Super Mario Run’s three modes don’t appear to be that disparate, unified by a common currency system and interlocking elements that could ensure you don’t stick to one specific mode alone. It will be interesting to see how Nintendo doles out Rally Tickets or modifies mechanics to earn more Toads in the weeks to come.

Are you playing Super Mario Run on iOS? Or are you waiting for it on Android? Let us know via the comments.