Siri vs Google Assistant vs Alexa: Which Is the Smartest Virtual Assistant in 2018?

Ever since Scott Forstall took the stage at the iPhone launch event in 2011 to introduce Siri to the world, the rise of virtual assistants has been swift. With so many intelligent assistants out there, it is hard to decide which one to use on a day to day basis. While Microsoft's Cortana ships on all Windows devices, it's safe to say that Apple's Siri, Amazon's Alexa, and Google Assistant are the most prominent and popular virtual assistants out there right now. While all three of them offer much of the same basic functionality, each assistant has its own set of strengths, weaknesses, and quirks. We pit the three of them against each other to find out which one is the smartest virtual assistant.

While Siri is locked to Apple's ecosystem, Google Assistant can be used on both Android and iOS devices. The experience is slightly watered down on iOS as the platform does not allow users to change the default assistant. Alexa can only be used on an Android smartphone as of now and the Alexa app in iOS is only used to connect to Echo devices. In some countries, Alexa can be used on an iOS device via the Amazon shopping application but that feature is not present in India.

We used Alexa on a Moto Z2 Force (Review) and to evaluate Siri we used an iPhone 7 Plus (Review). As Google Assistant supports both iOS and Android, we tried it out on both smartphones. Alexa's voice sounds more natural than Google Assistant's Indian accent, which comes across as a bit forced and robotic. Siri allows users to choose between American, Australian, and British accents, though an Indian accent is conspicuous by its absence.

The basic experience is very similar across all three virtual assistants, though all of them work best within their own ecosystem. Google Assistant plays well with Google applications, Google Home, and Chromecast. Similarly, you need a Fire TV stick and an Echo smart speaker to extract the most out of Alexa. Siri, thanks to Apple's closed ecosystem can only be used on Apple devices like iPads, iPhones, MacBooks, and the HomePod smart speaker, the latter not officially available in India.

Simple everyday tasks
All three assistants handle basic tasks like setting reminders and alarms, computing maths problems, and providing weather forecasts with relative ease. While Google Assistant and Siri can call and send text messages to anyone in your contact list, Alexa can only contact people who have signed up for Alexa calling/ messaging. 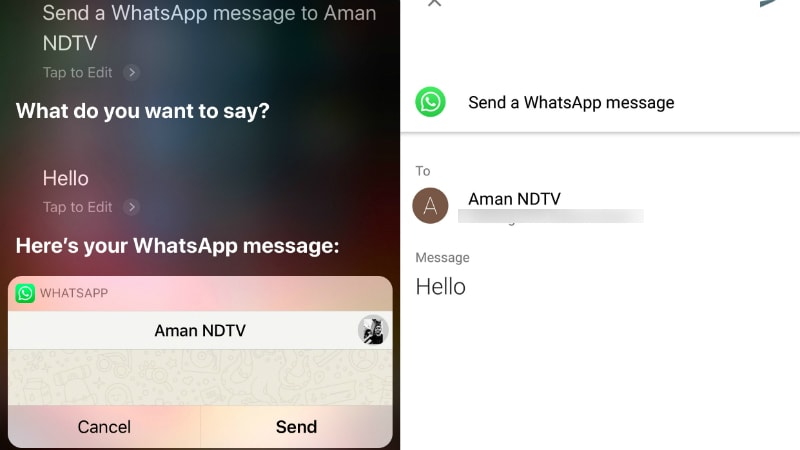 When it comes to changing device settings, Google Assistant and Siri are ahead of Alexa. On both iOS and Android, Google Assistant successfully turned on the flashlight but failed to switch on mobile data. Siri managed to do the exact opposite and Alexa in comparison stated "You don't have any smart home devices to get started" in both cases.

Trivia questions
We subjected all three assistants to a battery of questions such as 'How far away is the moon' and 'Who is Steve Wozniak'. Given how Google Assistant has Google's powerful search technology at its disposal, it was not surprising to see it answer the most questions accurately. No matter which platform we used it on, Assistant provided the most accurate and in-depth information. It also provided additional links as well as a source website for the information provided. 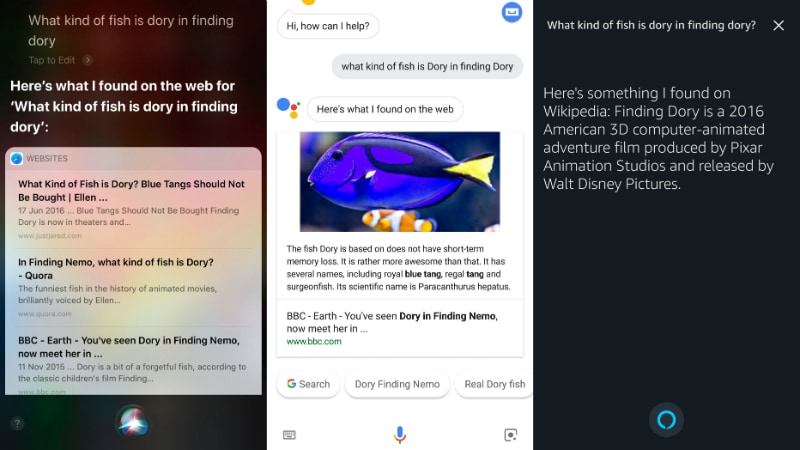 We were really impressed to see Google Assistant successfully answer niche questions like "What kind of fish is Dory in Finding Dory?" And "How often should I water my Chrysanthemums?". Siri, in comparison, just kicked us to a Web search in both cases. Alexa simply stated she does not know the answer in the latter and decided to give us details about Pixar's animated movie in the former.

When asked when is Ant Man and the Wasp, a movie hitting theatres on the 5th of July, releasing, Siri told us it was released on the 1st of January, 2018. Both Alexa and Google Assistant answered the question correctly. All three assistants are more than capable of answering queries related to Football and Cricket but only Google Assistant and Alexa can service fans of niche sports like Formula 1. When we asked Siri "Who won the Bahrain Grand Prix", it simply stated "Sorry, I don't have all the details about Bahrain Grand Prix".

Complex tasks
All three assistants are capable of suggesting restaurants based on cuisine as well as location. While all three were easily able to suggest good Chinese restaurants around our office, only Google Assistant managed to find places serving lasagna nearby. Google Assistant also offers to book a table at a nearby restaurant when you tell it that you're' hungry. It even gives an option to place an order via Swiggy and view directions via Google Maps.

Both Siri and Alexa utilise Zomato's database to showcase a restaurant's address, operational hours, and user reviews. All three assistants also allow you to call restaurants from within the search result. 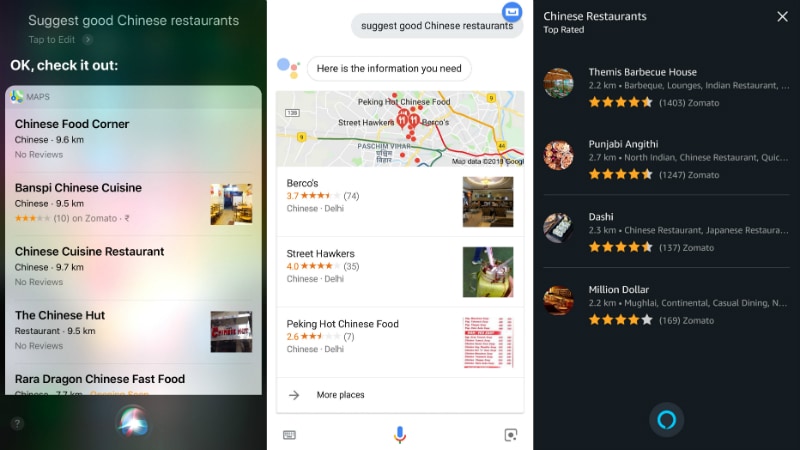 Virtual Assistants can come in really handy in the kitchen when searching for recipes. When we asked all three assistants 'How to make Ratatouille', Google Assistant offered a few recipe videos as well as step-by-step directions for popular recipes. Siri just presented a Web search, and Alexa gave up and admitted it didn't know how to do that.

When it comes to offering directions, Google Assistant gives solid time estimates and was able to direct us towards every landmark we threw at it. Siri in comparison is unable to provide directions in India and Alexa constantly gave us directions to Rohini West metro station instead of Hauz Khas metro station.

'Skills' allow third-party applications to add a ton of functionality to Alexa. Amazon has put in place a robust ecosystem of these skills, tying up with players across multiple categories like Uber, Ola, Cleartrip, GoIbibo, and UrbanClap. This allows Alexa to perform many tasks the other two assistants cannot, such as book flights, hotels, cabs, and even call electricians. Skills also allow you to plug in gaps in Alexa's core functionality. For example, enabling the 'Allrecipes' skill allows Alexa to talk you through over 60,00 recipes, a feature Alexa lacks by default. Alexa can also read your Kindle books aloud, which is quite nifty. 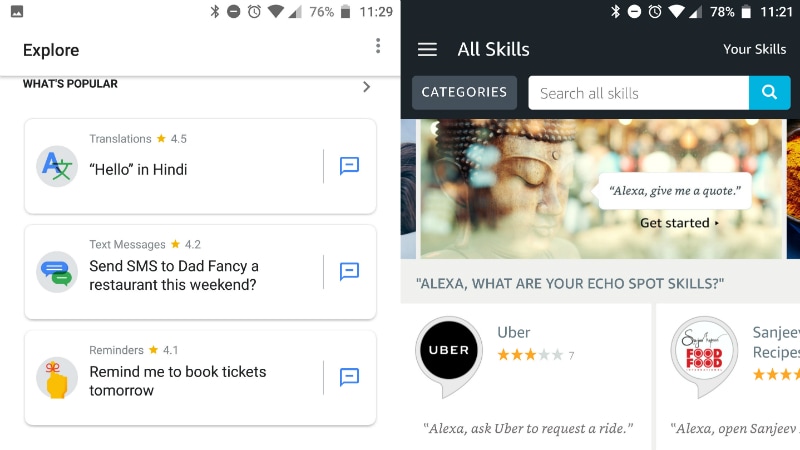 Google's Assistants functionality can also be extended via 'Actions'. Tapping the icon at the upper-right corner of the Assistant home screen takes you to the 'Explore' page where you can peruse through all the actions on offer. Examples of actions include asking Assistant to 'Play Riddle Room', 'Talk to IPL Quiz', and 'Ask Milkbasket to add bread'.

The ecosystem is pretty limited at the moment and the quality of actions on offer pales in comparison to Alexa's skills. As of January 2018, Google Assistant has around 1,800 actions. Alexa in comparison boasts of 30,000 plus skills. These numbers pertain to the U.S and in India, the amount of skills and actions might be lower. At WWDC 2018, Apple announced that with iOS 12, developers will be able to extend Siri's capabilities using Siri Shortcuts.

At the moment, Siri cannot look for movie showtimes in India, a feature supported by both Alexa and Google Assistant. All three assistants are also capable of playing music based on genre, mood and album/artist name. Each offering uses its default music service by default, but Google Assistant and Alexa can also integrate with other music streaming services like Gaana and Saavn. In iOS though, Assistant has to make do with Apple's default music service due to platform restrictions.

Context awareness
Google Assistant is far more conversational and context-aware than the other two. Asking Google Assistant "Who is their coach?" after asking who are the English Premier League champions yielded the name of Manchester City's coach. You can then take things up a notch and ask "How tall is he" or "Where is he from", and Google Assistant understands that you're referring to the same person and responds accordingly. Alexa in comparison stated the name of the coach successfully but struggled to answer any further questions. Siri failed after just one question, fetching the name of the head coach of University of Iowa Hawkeyes men's basketball team instead of Manchester City's coach.

Verdict
Google Assistant is undoubtedly the most well-rounded virtual assistant. It might have less flair than the other two (It cannot sing songs like Alexa, for example) but it is the most useful at the moment, especially in the India context. Not only does Google Assistant answer the most questions correctly, it is also more conversational and context-aware. With Alexa and Siri, it is very important to get the command just right in order to invoke the required response. Google Assistant in comparison, is very good at understanding natural language.

Alexa is the most customisable assistant of the bunch. Skills allow third-party applications to add a lot of functionality to Alexa. While Assistant offers similar feature expansion via actions, the quality and quantity of skills offered by Alexa is superior. That said, Alexa's core capabilities need spit and polish at the moment and it cannot be triggered by voice when set as the default assistant, something Microsoft's Cortana can do despite not being native to Google's mobile platform.

Siri has definitely improved over the years but still lags behind Alexa and Google Assistant in terms of capabilities. In our testing, Siri struggled with restaurant suggestions, location-specific queries, and pop culture questions. It also failed to understand context. That said, Siri's interface is easy to use and it does a great job with day to day tasks.

Siri vs Google Assistant vs Alexa: Which Is the Smartest Virtual Assistant in 2018?
Comment