JioNet Wi-Fi HotSpot Access: What You Need to Know to About Reliance Jio's Wi-Fi Network

Reliance Jio launched with a number of attractive data plans, starting at just Rs. 149. That plan doesn’t come with most of the value that Jio is offering however.

Reliance Jio Plans starting from Rs. 499 give you unlimited night-time (2AM to 5AM) data, and access to Jio’s online content services such as video on demand and music streaming, and also double the data on Reliance’s upcoming JioNet network of Wi-Fi hotspots.

(Also see: How to Switch to Reliance Jio Without Losing Your Number)

To make use of these hotspots, you need to download the JioNet app which is available on both iOS and Android through the MyJio app. Once you’ve installed it, JioNet prompts you to add a connection widget so you can instantly connect to a hotspot but this is optional.

The app uses your location data to show you nearby hotspots, and adds the Jio public Wi-Fi profile so that you can seamlessly connect to nearby Wi-Fi networks without having to enter any settings. Next, you’re taking to the account manager – yes, you have to have a Jio account to make use of the Jio Wi-Fi. The JioNet app automatically takes login data from the MyJio app, but you can add other accounts.

(Also see: How to Get and Activate Reliance Jio SIM Card)

This means that you have to be a Jio subscriber in order to make use of JioNet public Wi-Fi, but you do not need the SIM in your device in order to connect – much like the other Jio apps. We signed in with our primary Jio ID, and the screen shows that we’re not connected. To connect manually, go to your Wi-Fi settings, and connect to JioNet Wi-Fi and it starts metering your usage. 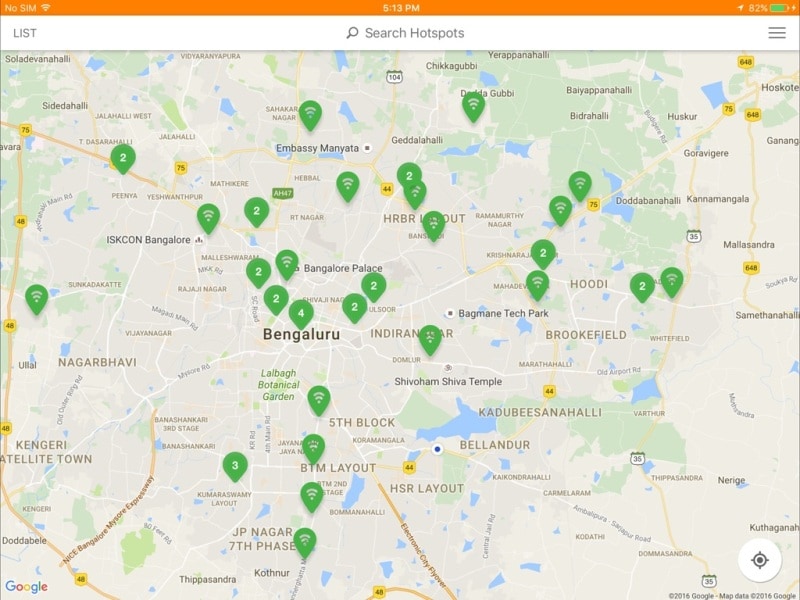 To find a nearby hotspot, first go into the menu inside the JioNet app, and then tap the Find JioNet Hotspots option. This shows a map view showing all the nearby hotspots. You can pinch and zoom to find the nearest hostpots but as of now, the rollout is very limited. We found a handful in Bengaluru but only one in Kormangala and one in Indiranagar, a few in the central ‘town area’ and the rest scattered around the outer parts of the city.

We found very many more in Delhi – including one near the Gadgets 360 office, and several more scattered about the city. Here too, the distribution is uneven – there are none near central areas such as Connaught Place where large numbers of people gather, for example. One other complaint we have is that the search function inside the JioNet app is extremely slow – it does end up showing the map with all the locations eventually, but it takes a fair bit of time to load them.

Once you are near a hotspot, JioNet lets you connect and start using the network, but at this point with the rollout just starting it’s too soon to comment on the quality of the connection. It’s not clear if there will be any standalone JioNet plans – as of now, access if bundled into the Jio tariffs. According to the tariffs, Wi-Fi usage beyond the amount listed in your plan will be metered at the rate of Rs. 50 per GB.