While the Pokemon Go craze has swept the world, the game has very little official documentation to help players out. It's left to the player to figure out how most of the things in the game work - from how to find the best Pokemon, to what the different items you collect in Pokemon Go are used for.

By now, you probably know what an Incense is, but do you know the best time to use one? If your reaction was 'wait, what?' you should definitely read on. In case you're just starting out, we've even got a beginner's guide. And if you're wary about installing the game, see our review. If you're having trouble installing the game, here's how you can get it on Android and iOS.

Here's a complete list of items you'll most likely come across:

Poke Ball
Without a Poke Ball, you can't catch any Pokemon. It's as simple as that. Thankfully, Poke Balls can be found at all Pokestops, and you can also buy them in exchange for Pokecoins at the shop. To use one, a Poke Ball must be flicked towards a Pokemon. If it hits it, the ball opens and the Pokemon is captured. A red light will pulse on the ball and when it stops, you've got the Pokemon. Sometimes, the Pokemon will resist and come out of the ball. If that happens, you will have to try again.

The chances of successfully capturing a Pokemon can be gleaned from the coloured ring that appears around a Pokemon when you touch a Poke Ball. It goes from light green to yellow, shades of orange and dark red. You can increase your chances by landing a Poke Ball inside the coloured ring. The smaller the size of the circle you're able to hit, the more XP you can get - you'll get points for a nice (10XP), great (50XP) or excellent throw (100XP). You can also get 10XP for spinning the Poke Ball before throwing it. 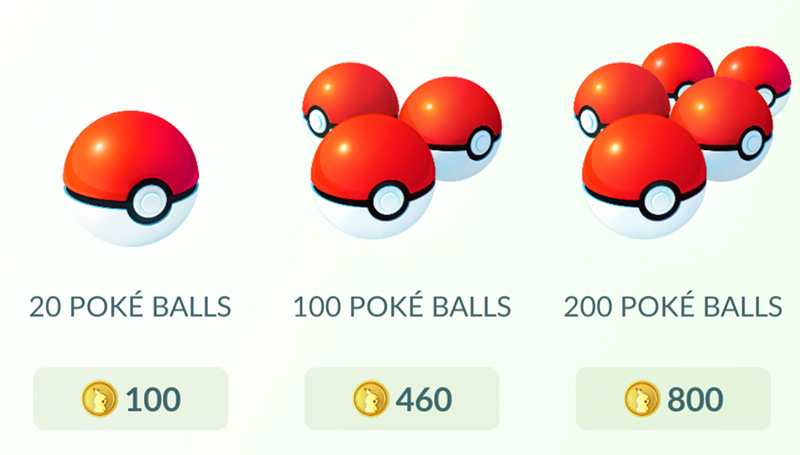 Great Ball
A variant of the Poke Ball that is better at catching Pokemon and holding onto them. It unlocks at level 12, and can only be found at Pokestops or by levelling up. Works just like the normal Poke Ball, with better performance - the Pokemon are less likely to resist this ball.

Ultra Ball
A variant of the Poke Ball that has a better catch rate than Great Ball. It unlocks at level 20, and can only be found at Pokestops or by levelling up. Works just like lesser balls, but save it up to trap that Dragonite the day you see it.

Stardust
You collect Stardust every time you catch a Pokemon, by levelling up, and defending/ placing a Pokemon at Poke gyms. Stardust helps you power up your Pokemon by increasing its CP and thus making it stronger, which should be useful when it comes to battles. As a tip, don't waste your Stardust on the Pokemon you catch initially. It's best saved for when you've levelled up a bit and have got strong Pokemon.

Candy
Candy in Pokemon Go is specific to each Pokemon and its evolved forms. Say you caught or hatched a Pidgey, Pidgetto or Pidgeot, you'll get Pidgey candy for all three. Candy has two main uses. The first one is in powering up your Pokemon and increasing its CP. The other, and more important role Candy plays is in evolving your Pokemon to their higher forms. Hence, you should be very careful in deciding how and when to use Candy on a Pokemon, especially for ones that need 50 candies to evolve.

For example, there's no point wasting 50 Zubat candies on a 80 CP Zubat as it'll give you a Golbat between 208CP and 293CP. Ideally, you should attain a higher level yourself, which will then net you a better CP Zubat in the wild. 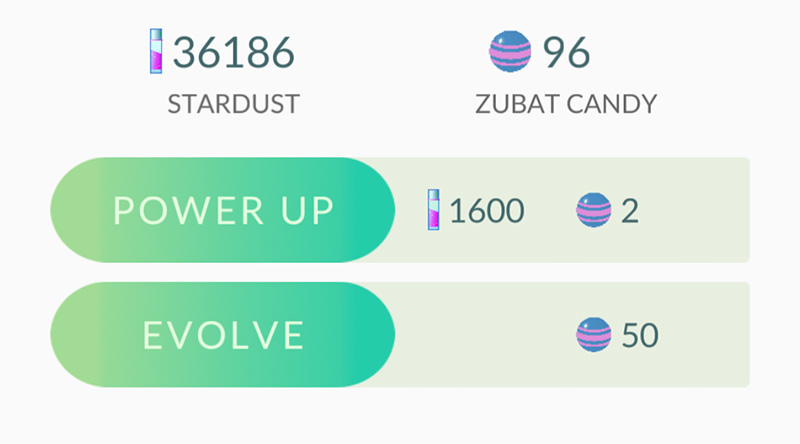 (Also see: This Pokemon Go Map Will Show You Every Pokemon Location)

Pokemon Egg
Eggs are your gateway to a new Pokemon, which can be found at Pokestops or by levelling up. They must be put in an Egg Incubator before you walk the distance written below it. The app must be open the entire time or all your efforts will go to waste. The greater the distance - 2km, 5km or 10km - the rarer the Pokemon that shall pop out when you complete said distance.

The dedicated community of players have compiled a list of Pokemon you can expect to find from your egg - for 2km, 5km and 10km.

Egg Incubator ∞
Every Pokemon trainer is given one egg incubator from the start. To use it, head into your Pokemon section, then swipe over to Eggs and start incubation on an egg. Once you walk a certain distance depending on what the egg says, it will hatch a new Pokemon. Egg Incubator ∞ is different from other egg incubators as it can be used indefinitely.

Egg Incubator
A variant of the infinite one, Egg Incubators can be availed mostly by levelling up or bought at the shop. In rare cases, Egg Incubators may be found through Pokestops as well. As mentioned before, egg incubators are essential in hatching eggs to get new Pokemon but can only be used for a limited number of times before they disappear.

If you do plan to spend actual money in Pokemon Go, Egg Incubators and Lucky Eggs are the only two worth your money. That's because walking any amount of distance is applied to all eggs currently in an incubator, so you if have multiple eggs incubating, they'll all hatch together. 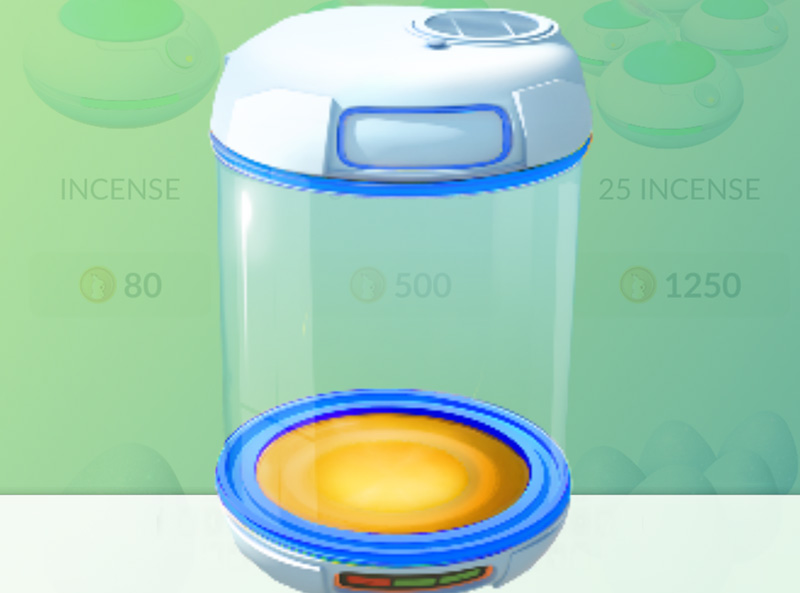 Lucky Egg
Don't confuse Pokemon Eggs with the Lucky Egg, which serves a completely different purpose. Once you enable a Lucky Egg, you'll get double XP for everything you do in-app for the next half an hour. Do not use one while you're sitting in one place - it's best used while on the go, in conjunction with Incense and an evolution spree.

You can get more by levelling up or purchase them at the shop for Pokecoins. As we mentioned above, if you intend to drop your hard-earned cash on in-app purchases, Lucky Egg is a good buy.

Incense
By using Incense, you can attract Pokemon to your location for 30 minutes. It is best used while on the go, in combination with a Lucky Egg for the added experience, as we mentioned above. Incense only works for you, so it won't help other players around you. You can get more Incense by levelling up, or buying it from the shop.

Lure Module
Lure Modules can be attached to any Pokestop to lure Pokemon to that area for 30 minutes. Unlike Incense, it works for all the players near that Pokestop. Players can identify Pokestops with lures on the map by the shower of pink petals that surrounds them.

Lure Modules are availed by levelling up or straight from the shop in exchange for Pokecoins. 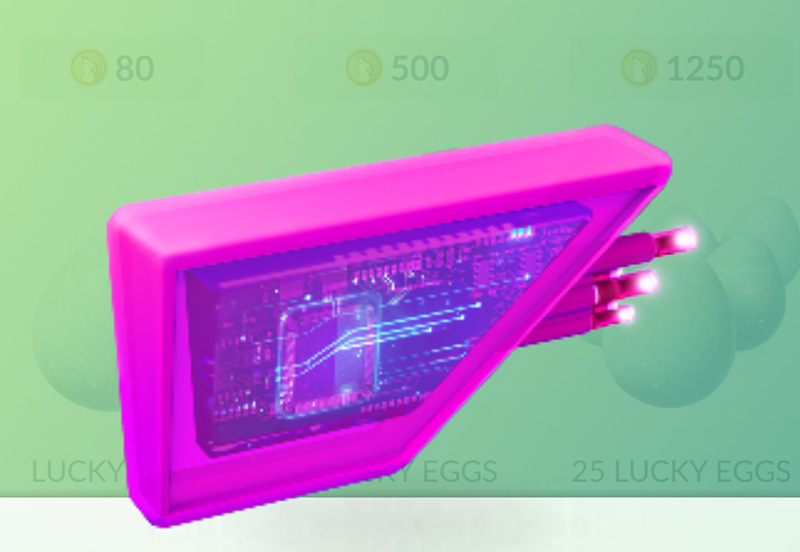 Razz Berry
If you're having trouble capturing a Pokemon, give it a Razz Berry. After that, it should become become easier to catch. It unlocks at level 8, and you can get more from Pokestops or by levelling up.

Potion
Potion restores the health of your Pokemon by 20 hit points (HP). It unlocks at level 5, which is when you can register with a team and start battling at gyms, so that makes sense. When your Pokemon battle, they can take damage, and using potion will get them back into fighting condition.

Super Potion
It unlocks at level 10, and it works just like Potion but it restores health by 50 HP.

Hyper Potion
It unlocks at level 15, and restores health of your Pokemon by 200 CP. Quite useful once you start to accumulate stronger Pokemon.

Max Potion
It unlocks at level 25, and it restores the complete health of your Pokemon. It's much needed for trainers who have to put down multiple Hyper Potions for their powerful Pokemon.

Revive
When your Pokemon loses in a gym battle with another team, it faints. You'll have to use Revive to be able to get it into fights next time around, before you can use any type of potion to restore its health. Do note that battling Pokemon at a friendly gym - one that's the same as your team's colour - does not cause your Pokemon to faint.

Max Revive
Max Revive is the stuff of legends, it seems. Not only does it get your Pokemon going again, it also restores its full health, saving you the trouble to use potions. It's only available once you hit level 30, so you might never see them.

Camera
The Camera item saves you the hassle of having to screenshot that rare Pokemon you want to show off to your buddies. Once a Pokemon is spotted, go into your toolkit and choose Camera. The app will then hide the HUD away so you can take a picture that makes it seem like the Pokemon is present at a location.

Bag Upgrade
For all the goodness of the above items, Pokemon Go places a limit of 350 by default. Once you hit that limit, you won't be able to store any more items. If you've got real money or 200 Pokecoins to spare, consider upgrading your bag so you can carry around more items than everyone else. Every time you purchase a Bag Upgrade, you will get space for 50 additional items.

Pokemon Storage Upgrade
Just like with your items, Pokemon Go places a limit of 250 Pokemon on your collection. If that's getting in your way, you can upgrade it at the shop for 200 Pokecoins that will let you carry 50 more Pokemon.

Do you have any questions? Leave them in the comments.

Further reading: Pokemon, Pokemon Go, Pokemon Go items
Akhil Arora Email Akhil Akhil Arora covers entertainment for Gadgets 360, interviewing stars such as Christian Bale and Anurag Kashyap, covering series premieres, product and service launches across the globe, and looking at American blockbusters and Indian dramas from a global socio-political and feminist perspective. As a Rotten Tomatoes-certified film critic, Akhil has reviewed over 150 movies and TV shows in over half a decade at Gadgets 360. When he is not completely caught up with new film and TV releases, Akhil ...More
2 Million Using Free Wi-Fi at Indian Railway Stations, Says Google CEO
Xiaomi Expected to Launch VR Headset on Monday