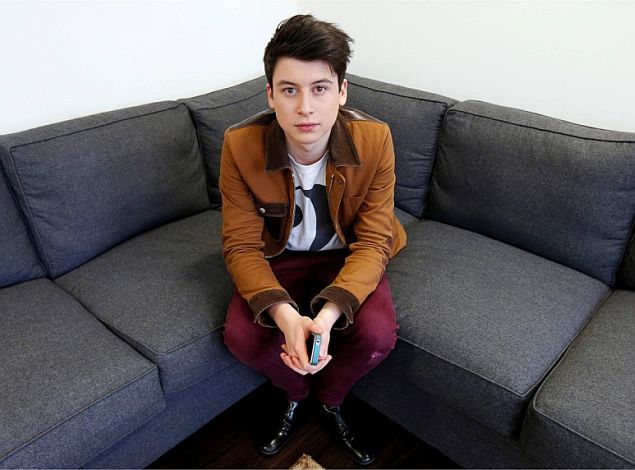 Earlier this year, Marissa Mayer launched the Yahoo News Digest iPhone app at CES, along with Nick D'Aloisio, the founder of a news summarisation company called Summly which Yahoo bought last year for a reported $30 million. The news digest, which was launched in the US first, is an interesting app which updates its content only twice a day, with just seven stories at a time. The stories are selected by a team of human editors, but they're put together by a computer algorithm, which takes inputs from multiple news sources to turn any news article into a two paragraph story that's easy to read, along with pictures, videos, stock information and Wikipedia summaries, where relevant.

OnThursday night, D'Aloisio announced the worldwide availability of the app, as well as launch of the Android version of the app, along with a new localised version for Canada, to go along with the existing US and UK versions.

A millionaire at 17, D'Aloisio isn't your typical teenager. Now 18, he has faced intense scrutiny in the last one year, ever since the Yahoo deal was announced. As a part of the deal, D'Aloisio has been working for Yahoo, something he claims takes up all of his time when he's not studying for his A-levels (the British equivalent of the 12th Board exams here). There's a well-worn narrative about how his family and friends and studies keep him grounded and humble, and how he hasn't changed at all.

A lot of kids his age are gamers, and many gamers are "completionists" - people who want the satisfaction of finishing a game, seeing the entire content. In this at least, D'Aloisio is no different from others his age - he wants the satisfaction of reaching 100%, of seeing everything. The only difference is that while others are talking about hidden achievements in video games, D'Aloisio is talking about the news.

"Most news apps, and I'm generalising here, but they're infinite streams of information. There's more than you can ever read coming in and it won't end, and that means you'll never feel 100% informed. We're the anti-thesis of traditional news, we created a finite digest, where you get the definitive stories, and then you've completed reading it and you know the news that is important," D'Aloisio says.

That sounds a little naive, and a little optimistic, and D'Aloisio also admits that there are situations where the Yahoo News Digest isn't particularly helpful - breaking news for instance. He says, "We do not do breaking news", but recovers, saying, "We are only updating twice in a day, and that means that you get to a measured and thorough understanding."

"When you look at the news apps on a spectrum, we're really on our own. The others, they're aggregators, while we prune, we get rid of stories. Also, we don't personalise the news, we're definitive," he says, adding, "People get all the news that they need to read, not just the things they want." This is accomplished by human editors, something D'Aloisio says AI doesn't have a solution for - yet.

From CES - to the UK launch - to now, it's been a busy year for Yahoo News Digest and D'Aloisio, but there's a roadmap planned which stretches far ahead. When D'Aloisio joined Yahoo, Summly's technology was quickly integrated into Yahoo News, but he's been involved as a product manager, a role which he says is about managing the "feel" of the user experience. Like so many others today, he cites the 50s and early 60s, and Dieter Rams' minimalist design as inspirations.

This is reflected in Yahoo News Digest, though the overall flow of the user experience of the app isn't as self-evident as the best designs in this minimalist style have been. Instead, there's a short explanatory panel which pops up when you first run the Yahoo News Digest.

To scroll through stories, you swipe vertically - tapping on a story brings it up, and a long press lets you share. Swipe to the left or right, and you can see other stories in the digest, or you can tap the back button to go back to the vertical list. It's easy to get used to but there are no visual cues and there is no intrinsic logic to the interface, unlike the classic works of design that D'Aloisio - and in fairness, most other app designers today - praise so much.

D'Aloisio seems unfazed by questions though, and points out that there is a long journey ahead of Yahoo News Digest - one which will include revising the app for larger screens such as tablets and then the desktop; expanding the kind of content being curated; and adding more country specific content. Video is another area which D'Aloisio finds very interesting, but he says, "We wanted to make sure we don't overwhelm the users, and so we've been very strict with the features and offerings that we have. We want people to have a simple experience, and add new things over time."

When talking to D'Aloisio, it's impossible to ignore his age, and he brings up the subject a couple of times himself. But it's also clear that over the last three years - he first gained some attention for an app called TrimIt, a precursor to Summly - D'Aloisio has learned a lot about presenting himself, and managing the media. At times though, he seems authentically like a kid. It feels particularly like that when you talk to him about working at Yahoo.

"I was 15 when I started," D'Aloisio says, "and doing a startup is very lonely. You're accountable for everything. With Yahoo, there's a lot of freedom instead," he adds, revealing for just a second the kid who is glad to have the pressure of having his company fail removed from his head. "At Yahoo there's so much creative freedom and support, and I've also been learning about how it is to work in a larger organisation. It's great, and there are so many people here who have so much experience and knowledge, I'm learning every day."

Of course, part of the fallout of the Yahoo acquisition has been dealing with the press. When Summly was made, no one was turning to the 17-year-old for oracular predictions about the future of the news industry. Today, most major publications in the world have carried his interviews. Sounding like a normal teenager, D'Aloisio says that it has been "surreal" and he's just "overwhelmed" by the attention. But there's another side to him, which you realise when you ask him what he's been doing with the money he's earned. D'Aloisio hasn't bought himself a house or a car - but he's been made a couple of investments in technology companies. Now that's a wise head on young shoulders.