Train waiting list prediction seems to be the hot new hack that's captured the imagination of at least three travel booking startups in India, with Trainman, Ixigo, and Confirmtkt, all using historical IRCTC booking data to predict the likelihood of getting a confirmed ticket.

Confirmtkt was founded in 2014 by Dinesh Kumar and Sripad Vaidya, two ex-IBMers from Bengaluru who were frequent train travelers to Hyderabad. That's one of the busiest train routes in India, where the difficulty of getting tickets is much higher. This pain point aroused their need to find a solution to getting a confirmed ticket.

As time progressed, Vaidya devised an algorithm for it, and Kumar, a full stack developer implemented the algorithm, and they tested and used in internally for a couple of years before the service went live. On July 5th 2014, they put out the first version of the website, and launched an Android app 25 days later.

When Confirmtkt launched, the prediction accuracy was 78 percent, says Pranav Chimulkar, Head of Marketing and Growth at Confirmktkt, but the duo introduced machine learning so that every time the algorithm got the prediction wrong, it understood the mistakes, and corrected itself.

"It's a continuous process, and the prediction accuracy is 90 percent now. Where it does go wrong, is when it it says there is no or medium chance of confirmation, and when it gets confirmed, but it doesn't happen the other way around. When we give a green signal, we get it right 98 out of hundred times," claims Chimulkar.

Their 'game-changing feature' is called Alternates. Rolled out in first half of August, alternates goes a step ahead of prediction algorithms, and exponentially increases the chances of getting a confirmed ticket, the company claims. 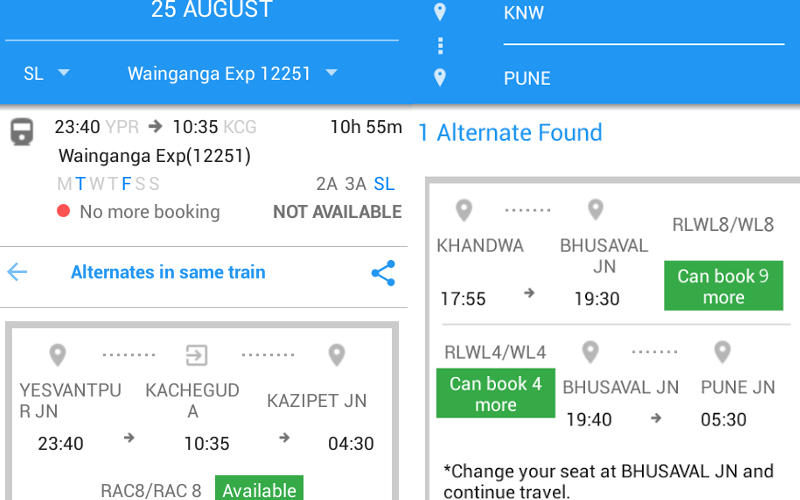 "Instead of point A to point B - there's a possibility of booking from A to X, and from X to B. Within the same train, you just have to book two tickets, and it's confirmed." explains Chimulkar. "The second alternative is to book to a further point C, and get down at B."

"In India, almost 57 percent of seats go wasted, not from end-to-end, but some point in the middle, as not everyone travels from the start to the end of the journey. This available inventory is what we're trying to capitalise on." Chimulkar says. "I'm sure other players will copy it, by that time, we have other things lined up," he added without getting into the details.

Users still need to visit IRCTC's official website or app to complete the booking. The year-old startup has received angel funding, and claims to have over 1.2 lakh monthly average users. Chimulkar says over 90 percent of the users are returning back, and the service is doubling its new user acquisitions every quarter.

Confirmtkt has apps for Android and Windows phones, with an average rating of 4.3 stars on both stores, which seems to suggest the users find the service largely lives up to its claims. An iPhone app is coming soon.