Meet the Moleskine Smart Writing Set That Costs Over Rs. 20,000 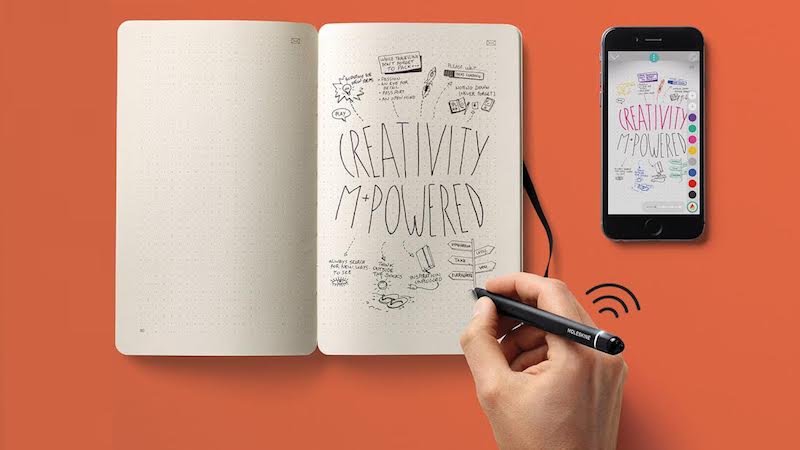 "It's pricy, I know," says Nikhil Ranjan, MD of William Penn, the official distributor for Moleskine in India. We're talking about the Moleskine Smart Writing Set, available from the company's website and stores for Rs. 20,995. We're sitting in Ranjan's Koramangala office in Bengaluru, not far from the company's store in that neighbourhood. The journey started as a stationery store some 15 years ago, before the company grew towards becoming a distributor for luxury writing implements, and other accessories.

But then, the Moleskine brand as a whole has always been expensive - a plain diary will set you back by around Rs. 1,300 or more; you can buy a generic knockoff at most retailers for around Rs. 200 or so.

"If you look at the quality of materials, the design, then these European brands definitely get something right that makes it worth it for people," Ranjan adds. That's why, for example, William Penn is looking at bringing more Moleskine products into the market as well, such as iPhone covers priced at around Rs. 3,000. Back to the Moleskine Smart Writing Set though.

What you get for your money is the notebook, which the company calls its "paper tablet" (more on that in a bit), along with the Pen+ smart pen, and a charging cable for the pen along with a replacement ink tip. The smart pen uses sensors in the pen along with the camera to track what you're writing, and syncs this with an app on your phone - compatible with both iOS and Android. It also has a mic, which allows you to record voice notes alongside your scribbles. You can only do this using the Moleskine notebook though - use the pen on a normal piece of paper, and it works like a normal pen.

The notebook itself is a stylish product with a unique design. The pages get slightly larger the further in you go until the halfway mark, and then get smaller again. The result is a slightly curved edge that resembles a tablet - though current generation iPad owners might not agree as the notebook is quite thick and curvy. The paper gradient has been shaped extremely well actually; running your finger along the side, you can't really feel the individual pages. Our Rs. 200 notebooks start to feel inferior already, but then we remember how many we go through in a month and feel better about them again.

After you use up the notebook, you'll be able to get a replacement for Rs. 3,500; but the notebook isn't actually the brains of the operation. The smarts reside firmly in the Pen+, which is a pretty nice pen to hold. The friction in using the pen feels nice and smooth, and although the pen is pretty thick - it's got a camera, sensors, and battery in there - it's also well balanced and feels pretty light.

The paper is the same as the Moleskine Evernote Smart Notebook, available now via Snapdeal at Rs. 1,240, and features a pattern of dots on the page. This pattern actually serves a purpose beyond keeping your notes in a straight line - at the base of the pen, under the nib, there's a small camera that is checking the paper for the identifying marks. As long as you're using the Pen+ with the Smart Notebook, it's digitising whatever you write. The dots also help to align the pen, and more accurately track your writing.

There's a standard Micro-USB port at the back of the pen, which is used for charging, and you'll top up in about half an hour. Ranjan says that this is good enough to keep you going for about a week. Syncing the phone and the pen can be a bit of an issue - Ranjan actually has to reboot his phone to get the Bluetooth connection working properly, but the good news is that the Pen+ also comes with enough onboard storage for several pages worth of data. The lines we scribbled while trying out the pen weren't there in the app before the reboot, but after that the connection worked perfectly, and the lines showed up right away.

"You can also set it to live mode," Ranjan explains, "where you can see everything you write." In this mode, there's a small delay between the strokes on paper and the same showing up on the app, but it's miniscule. Then, Ranjan taps a small envelope printed on the corner of the page - this immediately triggers the share function in the app, sending a PDF version of the page to a predefined contact.

"You can also tag your notes for better search, make voice memos, or press a button and transcribe your written words into editable text," Ranjan says, demonstrating the functions on the pen. "The pen also switches on automatically and connects to the paired phone when you start writing, and if you're not writing for a few minutes, it will turn off automatically to save the battery," Ranjan adds. It's pretty impressive, though other brands like Livescribe also have similar offerings that work pretty well. The problem, with those, and with this one as well, is that the price is much higher than most people would want to pay for a pen and paper.

Surprisingly, the combo seems to be selling fairly well, considering the price. It's on display at over half of William Penn's stores, which include major airports, and locations in the big cities; and the kit is sold at all of them along with the company's online store.

"We're selling a couple of dozen every month," Ranjan tells us. "The Indian market is not a large business for Moleskine, but the brand has loyalists and they are buying. Even so, we're still only reaching the tip of the iceberg, even among loyalists."

That said, he believes that offerings like this one, which blur the line between digital and traditional products, are slowly going to become more common, and more affordable.

"I think that there's going to be a lot of blurring of the lines, maybe you're going to have products that take the written word and transcribe it into handwriting perfectly over time, maybe we're going to have better versions of this product," says Ranjan, "and of course there will always be the people who say 'enough', and want to put their phone away and just use pen and paper."

Apart from more Moleskine accessories, William Penn is also bringing in hybrid products from its own house brand Pennline, he tells us. "Before Diwali, we're going to launch a notebook that comes with a built in powerbank and 8GB USB drive," he tells us. "There's going to be much more focus on these kinds of smart accessories going forward."