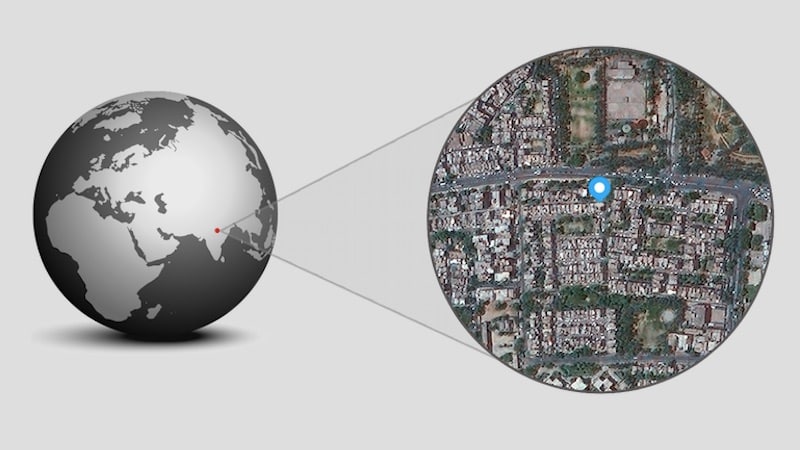 The system of addresses in India is pretty unreliable. There's not much by way of standardisation, and addresses are usually long, complicated, and often, misleading. That's something that a lot of people in the mapping space have told us over the years, and that's a problem that MapMyIndia wants to solve with its eLoc (e-location), which the company describes as the Aadhaar for your address - a digital identity for your physical address.

You can visit MayMyIndia's site to look up your own eLoc, or to create one if it doesn't already exist - the company started the process off years ago, and has a database of 20 million addresses with eLocs, according to MapMyIndia Managing Director Rakesh Verma. In case you're not covered though, you can add your own eLoc - although these are marked with a "U", for user generated, until the address can be physically verified by MapMyIndia, Verma says.

Of course, the idea of building a verified database of addresses across the nation brings up a number of concerns about security and safety. On the plus side, as of now, all that eLoc accomplishes is validate an address with a location on the map, though Verma says that he sees a future where government agencies are able to use eLoc to provide services.

As it turns out, MapMyIndia isn't the first company to attempt this. Nearly four years ago, a Hyderabad-based startup called Zippr started off with the same goal. Although Zippr did not respond to an emailed request for comment for this story, in a video on its site, founder Aditya Vuchi described its concept as being similar to Bit.ly, the URL shortener.

"The advantage is that zips can be communicated verbally," Vuchi says about Zippr in the video. "The postal system is not designed for modern e-commerce. You have addresses like 8-3- something, 23/n, next to this. We wanted to solve that at a very broad level. So we created Zippr, which is a layer on top of Google Maps."

Over the years though, Zippr hasn't really become a household name. You can use it to get your pizzas delivered without typing in a four line address, through both Domino's and Pizza Hut, but the use case of entering your Zippr address doesn't exist in any of the big three e-commerce players, or the big three food delivery companies. Nor can you do so with the big two taxi companies.

MapMyIndia's Verma is quite happy to address this though. "The problem with Zippr was that they were asking people to create their addresses, and it wasn't verMapMyIndia's eLoc Wants to Be an Aadhaar for Your Physical Addressified," he says. "I remember because we had started looking at this problem ten years ago, and when they came around, I thought, 'God, how can they hope to do this?'"

Unlike Zippr, MapMyIndia has been adding addresses itself, and these addresses are immutable - Zippr allowed you to associate a new address with an existing Zip, so your Zip wouldn't change when you moved. But Verma says that the eLocs are specific to addresses to ensure reliability.

The question is whether you really need an 'Aadhaar for addresses'. When you're using delivery services, you'll only enter your address the one time, and then pick it out of a list. If you're shopping on Flipkart, seeing a list of the different addresses makes it pretty easy to pick the right one. Seeing a list of eLocs would probably be pretty confusing.

Verma is unfazed by the question. "When we started 20 years ago, people would ask, why digital maps? Paper maps are much better, more detailed, and more convenient," he says. "A digital address is as important as a digital map. In India, the nuances of our addresses are such that it is very hard for the software to parse it and understand the address."

"What percent of even Delhi has a formal road name and house number, as against, third galli right from the school?" he asks, adding, "And as you go into smaller towns and rural areas, the problem becomes even worse. So if you want to have a reliable address that can be used with digital maps, then you need eLoc."

With that goal in mind, MapMyIndia started on its eLoc project 10 years ago, Verma says, but the company wanted to make sure that the data is accurate, verified, and has reached a critical mass so as to help usability, before releasing it. To that end, he says, MapMyIndia worked for eight years to verify 20 million digital IDs, creating eLocs around the country, before the launch on Friday.

Now, users can add their own addresses - but these will remain marked as user generated, until they can be verified. The addresses and the API for eLocs will be free, but this can be monetised as people can attach other attributes to eLocs, including rich media, which would be beneficial to commercial addresses.

But for now, eLoc is restricted to the MapMyIndia maps and website - you can't use it anywhere else. However, Verma says that this will change soon. "We have a lot of partners such as eKart (Flipkart's logistics arm) and Ola, who already use MapMyIndia's maps, and they will benefit from this," he says. "We only launched on Friday and had not talked to any companies before this, but I can tell you that over the weekend, we have had so many partner companies write in to us and tell us they want to identify eLocs."

However, at this point in time, Verma says it's too soon to reveal who the partners with eLocs will be. Looking at Zippr, although Verma's point about not requiring consumers to generate eLocs is a valid one, the larger issue seems to be to get partners on board.

According to him, there will be no charge for companies such as Flipkart or Ola to start integrating eLocs into their order flow, but unless companies such as these are going to adopt the technology, there's little reason for any consumer to interact with eLocs, unless they happen to be MapMyIndia users.

Some Google Self-Driving Car Engineers Quit Because They Were Paid Too Much
iPhone 8's $1,000 Price Tag, and Other Rumours About Apple's Next Smartphone