Is Slack Really Worth $2.8 Billion? A Conversation With Stewart Butterfield 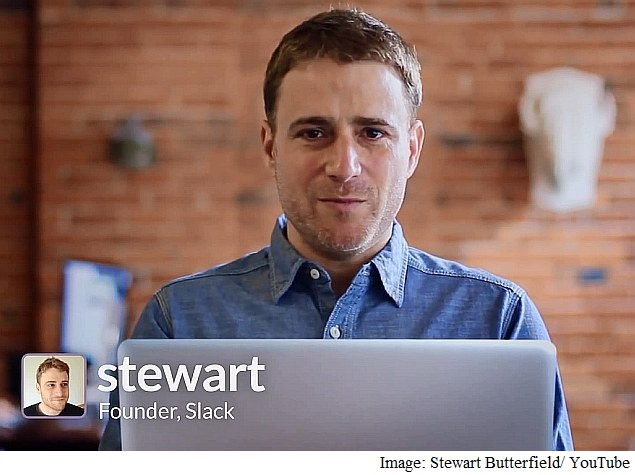 Stewart Butterfield, chief executive of Slack, in the company's office in San Francisco.Credit Jason Henry for The New York Times

When I recently wrote about Slack, a corporate messaging app that has aspirations to replace email, investors valued the company at $1 billion. That was a month ago. Today, the start-up announced that it has raised $160 million from a half dozen investors, and that it is now worth $2.8 billion.

Slack, which is just a year old, has more than 750,000 daily active users, 200,000 of whom are paying customers. By many estimates, it is the fastest-growing business application of all time.

Still, Slack's escalating valuation in such a short time seems destined to spark questions about the rising possibility of a tech bubble. I asked Stewart Butterfield, Slack's co-founder and chief executive, about the company, its growth and the bubble in a wide-ranging conversation this morning.

Q. I'm surprised that you're raising money, because last time we talked you said that you had enough money.
A. Do you have enough money?

And as a board member and a C.E.O., I have a responsibility to our employees, to our customers. And as a fiduciary, I think it would be almost imprudent for me not to accept $160 million bucks for 5-ish percent of the company when it's offered on favorable terms.

We don't have an immediate use for that money. But it increases the value of our stock and can allow potential employees to take our offers, and it reinforces the perception for our larger customers that we'll be around for the long haul. All of that stuff.

Q.Is there any downside?
A.Did you watch the last episode of "Silicon Valley"? For a company that's very early stage - their product isn't necessarily out, they don't know if their business model is going to work, they don't know what conversion rates and retention rates are going to be like - it can be fairly high risk. We've seen that in the past. A new company before it has even started has achieved a high valuation, and that hasn't worked out well.

But it's not really a factor at this stage. Growth has been unprecedented. It's crazy. So I think there's less downside risk here.

The market could turn, and the kinds of valuations you get from V.C. investors might not be as favorable in six months or a year. But on the other hand, we will have a couple hundred million dollars in the bank, and that's a great position to be in.

Q.Are you saying that having the money in the bank in case the V.C. market turns bad - was that a primary reason to raise it?
A.It's one of the best reasons. Let's say we were a gold-mining business, or maybe just a person who had a whole bunch of gold. And gold prices are going crazy. Selling some of the gold now, so you have cash in the bank in case things change in the future, is not a bad idea.

It's a hedge, and a hedge that's unbelievably good for us. It's a lot of money. In the case where everything turns to [expletive], we will look pretty smart.

Q.You've said before that valuations are "arbitrary." Is Slack's almost $3 billion valuation arbitrary?
A.Public investors often have some underlying rationale for getting to a decent price. In this market, there are bets about how big the company's market can be, how good the team is - but there is also just a whole lot of supply and demand.

And there are a lot of investors who have a lot of money. So when I say arbitrary, I mean that it's not coming from some airtight, textbook formula for how to value these types of companies. It's based on how many there are - and there's only one Slack - and if you would like to invest in this Slack, this is the price that it costs.

It's very highly influenced by other factors: Interest rates being low, there's a lot of money in V.C., funds get larger as a result, but the number of deals that they do remains about the same. So therefore the amount that they invest per deal goes up, which means the valuation goes up.

Q.So do you think Slack is worth $3 billion?
A.It is, because people say it is.

I'm not trying to be trite, and I know why you're asking, but if you go down to the fundamental level, we all have an agreement about what things are worth - until we don't.

Maybe the better question is, how great is the risk that the consensus about what Slack is worth will change dramatically?

There is a risk that investors will say, maybe this company, at this time, is only worth half what we thought. But since we came back from the holidays, everything doubled. That's a crazy rate of growth, but it has remained constant since we launched. We can't keep that forever - the law of large numbers, we'll start to saturate markets. But obviously we're not there yet. I don't feel like there are any serious vulnerabilities in the business. So I think even if our valuation were to go down, it would go down until we catch up to it.

Q.So it's a great time to be raising money as a founder. But if you were looking at the tech economy from a different perspective, would you still say it's a good thing that it's so easy to raise money?
A.I'd say it's probably good. The odds of new companies doing interesting things getting started would go up. I'm sure that it can have some bad effects in the sense of distorting young founders' perceptions about what their companies should be worth, and frustrating their expectations, potentially. And there are knock-on effects that are bad - pressures on salaries, pressure on rents. We signed a lease on our San Francisco office at $62 a square feet, and we sublet it at $75, nine months later. And down in Palo Alto, people are paying $120 per square foot, and not even fancy offices. And it's not a great thing, necessarily, for our local economy.

Q.But is it a great thing for the world? You're getting a whole bunch of money you don't really need that you probably won't use. What is the use of giving you $160 million that you're just going to keep in the bank for a rainy day?
A.Eventually, we will find a use for it, at least I hope we do. Now, as opposed to this money being used to house the homeless or feed starving children - but that's not where this money would otherwise go. This is investment capital. One could certainly make the argument that investment capital has inflated out of proportion to the rest of the economy. But it's not like if they hadn't given the money to us, they would have given to a homeless person instead.

Q.But the reason people outside of tech look at a story like a year-old company being valued at $3 billion is that they wonder, what if you're wrong? What if your growth is an illusion and it won't continue? Or what if there's something else you're missing? And not just you, but a whole bunch of other companies like you that have been raising money so fast. Do you worry about that - that there may be some kind of systemic problem?
A.Yes and no. As a citizen, I don't think it would be a really bad thing in the end if all these investors lose a great deal of money, because it's really not a very large percentage of the overall economy. I'm quoting Marc Andreessen here: The entire amount of V.C. funding that happened last year was $50 billion. That's compared to the total market of share buybacks and dividends by public companies in the US being $1 trillion. So it's one-twentieth of the overall public market dynamics, which is a small percentage of the overall economy, so it's not going to make a difference to most private citizens whether V.C.s lose a lot of money here.

It does make a difference to me personally in that sense that it matters what happens to our employees, partners and the investors that I work with directly.

Q.So what are the possible things you can do with this money?
A.Acquisitions would be one. Advertising could be another. We may want to be able to spend beyond our means to grow the business. It's nice to have all kinds of options. We might have to defend ourselves against predators. We might find opportunities to do something better or faster that requires capital. At some point we'll start advertising, and let's say advertising is effective for us - so we may put tens of millions of dollars into it. I'm not saying that's what we'll do, but it's nice to have the option.

Q.So you go out and raise money and you don't have to tell the investors what it's for?
A.Nope. They want to own some of the company, and they believe it will be worth more in the future. And that's it.