Everything about Decathlon screams “offline.” Established in France in 1976, Decathlon is now among the world’s largest retailers of sports equipment. The company has over 1,100 stores worldwide and has been in India since 2009 with a presence in multiple cities. In a world where we Amazon and Flipkart have made huge strides in making all products available online, Decathlon is doing quite well with its core strategy of setting up huge offline stores, often on the outskirts of big cities. From walking to scuba diving, Decathlon stocks gear for all kinds of sports.

Anyone who’s been to any of Decathlon’s 60+ stores in India will know that its range of reasonably priced gear is quite popular and long queues at checkout counters are a part and parcel of the experience. As a Decathlon employee puts it, quite often you’ll be forced to stand in queue for half an hour even if you bought just one t-shirt. Decathlon wants to change that.

In its Brigade Road store located in the heart of Bengaluru, Decathlon is trying something different. The typical Decathlon store is huge, around half the size of a football pitch, but the Brigade Road store is much smaller and is spread across two floors. The store stocks fewer items, with technology stepping in to fill the gaps.

The coolest piece of tech is the self-checkout counter, which comprises of an RFID scanning box. You just need to enter your phone number on the screen and then literally throw all the products you’ve ordered into the box - no need to scan each of them manually. You’ll see all of these added to your cart automatically and you can complete the transaction simply by paying via your credit or debit card.

Decathlon knows about the difficulties people experience in its stores — long queues and difficulty in finding products — and it has designed an app called Scan & Go to help with that. Scan & Go, which works on iOS and Android, lets you scan the tags of products you pick up in the store via your smartphone’s camera. Once you’re done, you pay online via the app, and go to the QR code scanner at the gate. Once you scan the code, you can leave the store with your purchases.

This sounds good in theory, but in practice, we encountered some difficulties. We found the app to be a bit slow because our mobile Internet wasn’t very fast at the Decathlon store. Even with the free Wi-Fi at the store, the app didn’t work as it should. Decathlon’s Gael Robin, who’s the Product Owner for the Scan & Go app, told Gadgets 360 that this is something the company is aware of and is working to fix. The company is considering the use of mobile network signal boosters in the store to make the experience seamless.

The store also has a VR zone where you can wear a virtual reality headset to try the tents that Decathlon sells. The Eva Mall store doesn’t have enough space to stock full-size camping tents, so it has miniature models of these and to see what a full-size one would look like you have the VR experience. You get to go inside various rooms in the tent and to see the kind of weather they’re best suited for. This experience is quite cool, but we had to bend a bit and even sit at times when we were “inside” the tent in VR. Doing that to checkout a real tent is fine but when you’re wearing a wired VR headset, it can be a bit uncomfortable. Still, the idea is quite good and does its job.

Finally the store also has a locker at the entrance, where you can collect your packages without any human intervention. If you order products on the Decathlon website, you can choose to go to the Eva Mall store in Bengaluru to pick up the parcel. If you do this, you’ll be notified once the order is ready and you’ll get an OTP via email. You can then go to the locker, key in the OTP and take your package. This is quite cool — similar to Amazon pickup lockers in the US — and in the demos that we were shown, worked quite flawlessly. 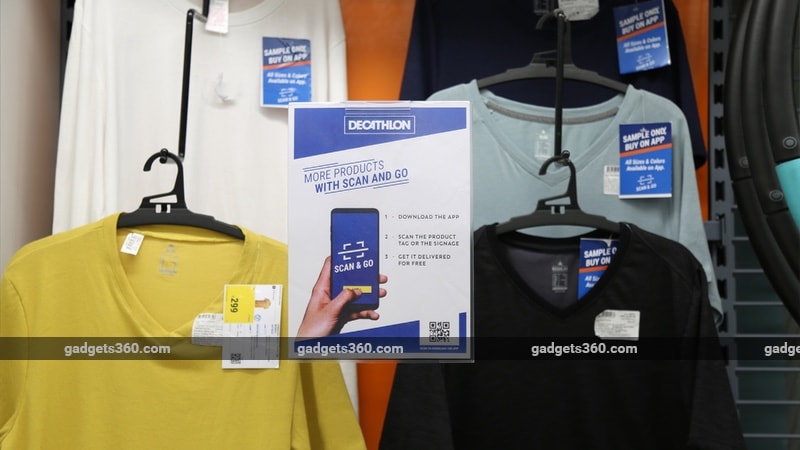 Decathlon’s vision for this store hints at what’s to come in the future to the company’s stores in India and abroad. The bigger theme, however, is what other stores could learn from this. Right now many offline stores support payment via digital wallets in India, but you still have to stand in a queue and have a person manually scan each product’s barcode before you can leave.

Decathlon can implement this technology because it sells only its own products in the store and everything is RFID tagged. With multi-brand retail stores, that may be a bit more challenging. There’s also the worry that people may just find the RFID tags and remove them to take the product home without paying. Decathlon can prevent this with some products such as a basketball where the tag is inside the ball, but for other products, the RFID tag may be much easier to remove.

Until these issues are ironed out, a seamless checkout experience like that of Amazon Go in the US remains a dream. However, one hopes that retail stores continue to use technology to make things convenient.

Further reading: Decathlon
Pranay Parab Email Pranay
Pranay is in charge of podcasts and videos at Gadgets 360. Over the years, he has written over 500 tutorials on iPhone, Android, Windows, and Mac. He has also written in-depth reported features on the intersection of technology and culture, reviewed fitness wearables, been the social media manager, started two podcasts, and produced several tech videos. He loves travelling, particularly to places not frequented by tourists. He keeps running half-marathons across the country and hopes to complete ...More
Uber Brings 'Safety Toolkit' Feature to India
Oppo A3s 3GB RAM, 32GB Storage Variant Launched in India: Price, Specifications