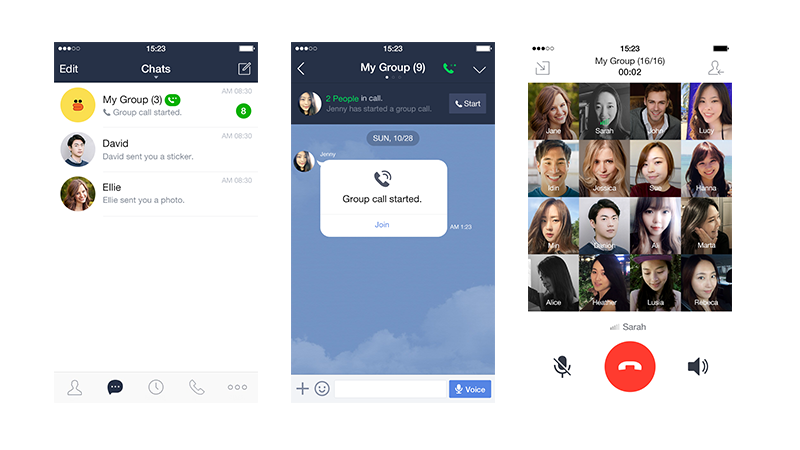 There are times when you’ll want to initiate a conference call. The most obvious use case is for businesses that wish to collaborate with people not present in the same physical location. Then there are times when you want to coordinate or catch up with friends and family, and typing on the phone just isn’t cutting it.

Making a typical conference call on a mobile phone generally involves calling the first person, then dialling another number as person number one holds the phone, and ultimately merging the two calls One person can’t conference more than two people, unless the other two make conference calls themselves to more people. All this is assuming you’ve enabled the conferencing service on your connection. Not to mention if the original call drops, then the other two get disconnected too, requiring a repeat of the process. Finally, you’ll end up paying by the minute too.

Needless to say that making conference calls the old fashioned way is just too cumbersome, and if you have a reasonably fast and reliable internet connection, using messenger apps to do this is much more convenient. You can initiate conversations with tens (even hundreds) of people, and you can join the call at any point of time. Having said that, it is unfortunate that at the time of writing this article, the most popular messaging app, WhatsApp, doesn't support group calls. Some other popular apps like Telegram and Viber don't have this feature either.

Thankfully, a lot of other popular messaging apps do support this for free, so we decided to compile a lost of these applications and we'll also share how you can initiate them. Note: even though we said free, since the calls route over the Internet, there is data consumption to consider, especially if you're making these calls using mobile internet. Typically, a two-person VOIP call takes anywhere between 300 Kb to 700 Kb per minute. A conference call potentially should take a similar amount. So, if you're on a frugal data plan, be warned of making conference calls eating through your monthly quota, or better yet, shift to an unlimited Wi-Fi zone before making these calls.

1) Facebook Messenger
There’s a good chance you’re on the world’s most popular social network, Facebook, and because of that you also have access to Facebook Messenger, its homegrown app that stands alongside the 2014-acquired WhatsApp. Upto 50 people can join a common conversation on this platform.

2) Skype
Microsoft-owned Skype has become a verb for video conferencing (for e.g, “let’s Skype on Wednesday”), but you’ll be glad to know that it supports multi-person audio calls too. The app supports conference calls of up to 25 people, and you can even add people who don’t have the app to join the call via VOIP - i.e. regular mobiles and landlines (which is possible after purchasing Skype credits).

How to make conference calls on Skype:

3) Hangouts
Although Google hasn’t shown much love for Hangouts after releasing Allo and Duo this year, many people still use the app simply because it’s preinstalled on many Android phones, and also because of the migrated users of good ol’ Google Talk. Up to 10 people can converse using Hangouts, and you can also add more people easily by sharing an invite link.

How to make conference calls in Hangouts:

4) Line
Line is a popular Japan-based messaging app launched in 2011. The app is synonymous with its support for stickers and free calling between Line users. The app apparently supports voice calls between a massive 200 people. Figuring out who’s talking among a crowd is easy, as an icon appears above the conversing person’s user profile.

How to start group calls on Line:

5) Hike
The India-based messaging app Hike too supports conference calls of up to 100 people at once. Initiating con calls is similar to many of the apps mentioned above.

How to start conference calls on Hike:

6) WeChat
Similar to Line, WeChat too can manage conference calls, provided you have people using WeChat on the other end. The process is the same.

How to initiate conference calls on WeChat:

So, which app do you prefer making conference calls with? Let us know.

Chinese Manufacturers Capture Nearly 40 Percent of Indian Smartphone Market in 2016: IDC
Want a Touchscreen on Your MacBook? AirBar Might Be the Answer